In Norrköping built rented apartments next to Norrköping’s football stadium. The houses are NCC’s proprietary concepts People Accommodation and P303. The concept is characterised by affordable apartments with good quality and design, and low power consumption.

The area may close to public bus and tram and is located on the bicycle and walking distance to the centre of Norrköping.

Construction start is planned in December 2014 and the first apartments are scheduled for completion in May 2016 The whole area is clear in December 2016.

In Norrkoping in Upplands Bro built rental units according to the concept People Living with freestanding tower blocks. The homes are ytsmarta and has low energy consumption.

Construction start is planned in December 2014 and the first apartments will be ready for occupancy in April in 2016.

The total order value is recorded in the fourth quarter of NCC Construction Sweden. 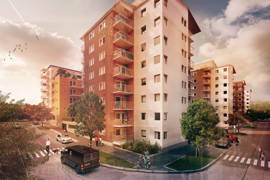