A talented young graduate has been named Persimmon Homes’ Young Achiever of the Year, earning himself a £2,000 prize.

Site manager Ian Brown, from East Kilbride, beat off competition from hundreds of other apprentices and graduates across the country to be announced as this year’s overall winner.

The 23-year-old was described as a “real asset to the team” by his Director, Alan Prickett.

“Ian is a worthy winner and I am proud of his achievements. He joined the team in June 2013 and hasn’t looked back. His drive, determination and hands-on approach has proved to be a winning combination and I will continue to support him as his career progresses.”

Ian studied construction management at Glasgow Caledonian University prior to joining Persimmon Homes West Scotland as a graduate site manager and was promoted to the role of site manager with his own site on April 2015.

During the awards ceremony at Persimmon’s York headquarters Ian received not one but two awards. In addition to the company’s Young Achiever Award he also won the Duncan Davidson award for young people who have the same entrepreneurial flair and spirit that Duncan demonstrated when he founded the business 40 years ago.

“I knew that I was shortlisted for the Duncan Davidson award and was thrilled to win but knew nothing at all about the Young Achiever Award – it was a great surprise and I am proud to have my work recognised in this way.

“I am keen to keep progressing – our chief executive Jeff Fairburn started in the construction industry as a 17-year-old trainee quantity surveyor which shows what can be achieved with hard work.”

“We are thrilled that a member of our team has won such an accolade and hope that it encourages more young people to join the construction industry.”

The Persimmon Homes Young Achievers Awards are open to all employees who are 25 or under. Nominees from each of the builder’s 26 regions go forward to be considered nationally by a panel of directors, including Chief Executive Jeff Fairburn.

Ian is currently the site manager at The Beeches in Garthamlock, Glasgow just one of a wide range of new developments in and around Glasgow with new developments commencing in Bridge of Weir, Cambuslang, Cowglen, Johnstone, Sterwarton, Kilmarnock and East Kilbride. 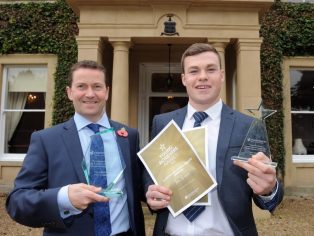