A young land buyer from Sutton Coldfield has been named as the UK’s top Young Achiever in a national house builder’s award scheme.

Daniel saw off competition from across the company’s 24 regional businesses to receive the accolade from Persimmon Homes chief executive Jeff Fairburn in recognition of his exceptional contribution.

The 24-year-old quantity surveying graduate is based at Persimmon’s Northampton regional headquarters, where he is involved in identifying potential development land and negotiating contracts.

The inaugural Young Achievers award programme was launched by Persimmon Homes earlier this year to showcase its apprentices and sales trainees who have gone above and beyond to succeed in their role.

Daniel was initially selected as a regional winner along with trainee site manager Jordan Johnson from Kettering and Northampton-based apprentice carpenter Michael O’Connor.

“We are absolutely thrilled that Daniel has been presented with the prestigious Duncan Davidson Award. He works very hard and we are hugely proud of his achievement.”

“Persimmon manages a robust apprentice and trainee programme, taking more than 100 young people into the business nationally each year.”

“We feel it is important to reward those youngsters who have got off to a flying start and Daniel, Jordan and Michael are all perfect examples of this.”

Jordan, 22, is a trainee site manager based at The Hedgerows in Irthingborough. He was selected as the region’s Business Trainee of the Year for his rapid grasp of building regulations and quality, forming positive business relationships and excellent customer care.

Nineteen-year-old Trade Apprentice of the Year Michael is an enthusiastic and hard-working young carpenter, based at Persimmon’s Rushymead development in Rushden. He was praised by operations director Adrian Smith as being the best apprentice he has ever worked with and a valuable member of the construction team.

“It wasn’t easy singling out individuals to best represent our region. However, we felt that Daniel, Jordan and Michael are all shining examples of our future workforce and they are already well on the road to forging successful careers.” 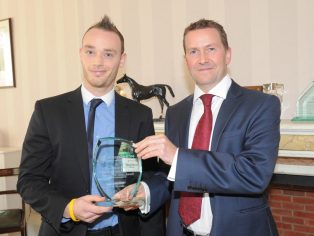