A leading house builder says work is underway on a £11 million development set around a stunning area of open space in a Midlands’ village.

The builder says the site will feature a mix of homes to suit a range of buyers, with a central green providing a stunning centrepiece.

“This is an exciting new development in an attractive village which has excellent access to the motorway network in the Midlands.

“We are confident that the range of properties on offer will appeal to families just starting out as well as those looking to move to a bigger home with more space.

“At the heart of the scheme is a central open space called The Green, which includes a pond, natural play area and orchard. It will make a magnificent centrepiece to a development which will have family life at its heart.”

A specially designed and furnished show home is scheduled to open on site in June 2014.

Wychbold has its own shop and post office and first school and nursery and is ideally situated close to the M5 and A38, giving it unrivalled access to the region’s motorway network.

It is best known for its world-famous garden centre, Webbs of Wychbold, which is one of the largest in the UK and plays a key role in village life. 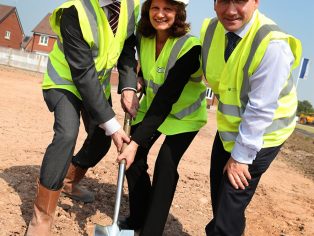