When it comes to wireless control technology, Electrorad has taken the market to a whole different level with a series of electric radiators that may be controlled using a smartphone, tablet, or computer, and even by voice command.

Whilst Electrorad’s Digi-Line range enables homeowners to control their heating from anywhere in the world – courtesy of Electrorad’s CleverTouch App – the Vanguard WiFi range goes one step further and is one of the first to have voice control compatibility with the market-leading Amazon Alexa. Whether it’s to turn up the heat or reduce the temperature, the radiators’ heat output can be controlled simply by talking to Alexa.

Remote control of Digi-Line, Aeroflow and Vanguard WiFi’s heating functions can be made using  their dedicated Apps that are available for both iOS and Android. The Apps work in conjunction with either a central touchscreen or Wi-Fi gateway to give control of room temperatures and programming. Should plans change, or if there are significant changes in the weather, homeowners can control the temperature and operating times of their radiators from wherever they are. The Apps also display the current ambient temperatures in each room and the status of each connected device.

Unlike many other equivalents, Vanguard and Aeroflow WiFi models also feature an inbuilt RF chip with a signal that can ‘hop’ up to five times to increase the range and help reach remotely-sited radiators. These models also feature a Geo-Location option that automatically activates or deactivates the heating when the homeowner is at a set distance from the home; cleverly ensuring that heat is not wasted in an empty home.

“Our radiators offer immense appeal to those homeowners who wish to enjoy the very latest in remote control technology and intelligence.”

“As well as offering freedom and flexibility, the technology offers significant control over energy costs too. And, as the Smart Home trend continues, wireless remote control technology will soon become essential,”

Both Digi-Line and Vanguard Wifi are available through all electrical wholesalers. For further information visit www.electrorad.co.uk or call 0113 274 6799. 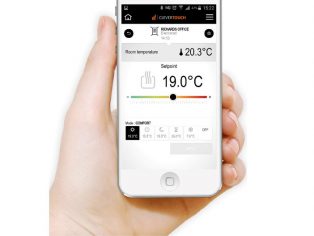