The winner was selected from six shortlisted projects that were chosen by the WAN jury panel of industry leaders including Richard Doone, Director of Doone Silver Architects, James Everitt, Director of EPR Architects, Graeme Rapley, Director of Design and Technical at Arney Fender Katsalidis, and Niall Cairns, Director at Assael Architecture.

The jury deliberated between the winning project and Apartman 18 in Turkey by Aytac Architects.

Standing at the tip of a triangle-shaped plot of land in Paris’ 11th arrondissement, Aluminum Tip consists of a moving facade for the residents and a landmark building for the neighbourhood.

The new building creates visual transparency in the space between street and inner courtyard by means of a balanced design that liberates it from the site’s cramped nature. The corner was given expression by the step-like receding roof that slims down to a simple, strict line.

The pattern of the street-side facade expresses this rigor with the regular spacing of the tall, narrow picture windows, with variations obtained by alternating the opening and closing of the folding shutters and the subtle reflection of natural light on the anodized aluminium.

The outdoor entrance and landings rise vertically, alternating open views from each landing onto the city or the inner courtyard. The goal has been to give occupants a gradual pathway from the public space of the street to the private space of the flats by means of a compact design that re-interprets the ‘city’s substance’ that was previously missing.

Graeme Rapley said  the architects “really had a challenge with the environment” with Richard Doone expressing his fondness of the abstract quality of the design by saying “I like the simplicity, I like the rigor, and I like the purity of the concept that’s carried all the way through.” 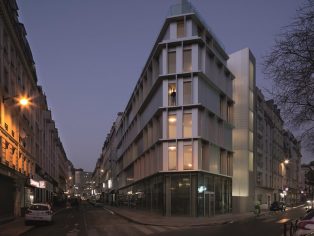