Built within just a few months in 1927, the Weissenhof Settlement in Stuttgart represented a revolution in house building. The designs, by a range of world-famous Bauhaus architects including Walter Gropius, Ludwig Mies van der Rohe, Le Corbusier, were indicative of living in the future. Stuttgart based architect and engineer Werner Sobek has carried on this tradition with the creation of world’s first fully Aktivhaus® (active house).

Assembled in just one day, the Aktivhaus® known as “B10” for short was designed by Professor Sobek and realised by SchwörerHaus, specialists in prefabricated wooden constructions.

Thanks to a sophisticated energy concept and an intelligent building automation system controlled by a specially design app, the Aktivhaus® generates twice as much electric power from sustainable energy sources as it consumes making it the first functional Aktivhaus® in the world. The building is able to continuously adapt to changing conditions and requirements of indoor and outdoor areas; this enables it to generate approximately 200% of the energy required to power building services and controls, as well as household electricity by itself, all generated from renewable energy sources such as solar power. (The PVT system on the roof is a combination of photovoltaic and solar thermal technologies, which means it produces electricity and heat at the same time and is projected to produce 8 300 kWh of electricity annually).

The 85 square metre building uses the recouped energy to power two electric cars and – utilising smart grid technology – the neighbouring house built by Le Corbusier now home to the Weissenhof Museum. The architectural design of Aktivhaus® is based on the Triple Zero concept developed by Werner Sobek. The building is not only designed to fulfil the highest demands on aesthetics and user comfort, but also to generate more energy than is needed to run the house (zero energy), to produce no emissions and to be returned fully to the materials cycle (zero waste) at the end of its life. The objective is to minimise the consumption of energy on as well as maximising the proportion of ecologically friendly electricity consumed on-site.

Werner Sobek sums up his approach in saying:

“B10 is a prototype intended to show how the principle of an Aktivhaus® can be transferred to concentrated apartment construction in major cities around the world. It demonstrates how future-proof buildings, new mobility concepts and residence-based energy supply can all be intelligently and sustainably combined with one another. New houses should also be able to supply older ones – we call it the sisterhood principle. In this approach, energy is consequently consumed where it is generated – and preferably at times when the cost is particularly low.”

High level of design: As well as its energy efficiency, the building offers important design innovations. Two important factors in this achievement were the high level of prefabrication and the integrated planning work of an interdisciplinary team consisting of architects, engineers and electronics specialists. B10 was planned and industrially prefabricated within a few months before being completely assembled onsite in one day. The constructive innovations of the building include for example, the use of just 17mm thick vacuum glazing in the form of a full height glazed front. Another important innovation includes the installation of an hydraulically powered facade attached to the steel beam frame (on which Aktivhaus® itself stands) that fulfils a dual function as a terrace. The electric Smart vehicles that belong to Aktivhaus® are also able to access the building via this folding entrance.

Energy control systems: B10 dovetails the energy systems of electro-mobility solutions and buildings to an overarching integral control system. As a consequence, it combines the charging infrastructure and the building services equipment to generate, store and manage energy in a central element – that in turn makes B10 the link between the user, building, vehicle and the smart grid. Combining mobile and permanent infrastructures is an extremely promising approach towards achieving an integrated supply to serve the needs of both electro-mobility and the built environment.

The Aktivhaus® project team will spend two years continuously measuring how much energy B10 generates and consumes. In addition, a whole range of data will be gathered that is relevant for building research. This will be scientifically analysed at the Institute for Lightweight Structures and Conceptual Design (ILEK) at Stuttgart University. In the first year, the building will be used for demonstration purposes and for analysis. It will then be used for another year as a residence to gather further experience with self-learning building control systems. Upon completion of the research project, the building is to be dismantled and reassembled in a different location. A showcase of sustainable architecture; once the research project concludes, B10 can be moved or used for other purposes – it was installed in just one day and can also be deconstructed in one day. 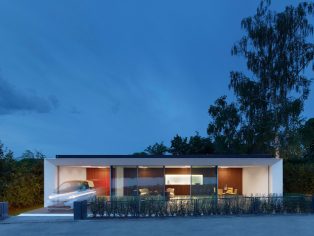