Chief executive Alan Brown capped an impressive year for the UK’s most upmarket major home builder, when he collected the accolade in front of 2000 people at Britain’s biggest ever business awards.

The company, which has its national headquarters in Edinburgh, recently delivered record annual results, seeing pre-tax profits almost double to £50.9 million and setting a target to achieve revenues of £1 billion within the next five years.

“It was a privilege to collect this award on behalf of the entire team at CALA. Everyone has worked incredibly hard to get CALA to this very strong position.

“It’s also pleasing to earn this particular award because it cements CALA’s place at the forefront of Scotland’s major business names.

“It was a proud moment to get this recognition in front of such an impressive gathering of business figures, as part of Scotland’s most talked about business awards right here in the city where CALA Homes is based.

“High praise is due to the award organisers. This event is not only a celebration and showcase for the strength of Scottish business, it was also a fantastic fundraiser for some very worthy causes – another great reason to be involved.”

Thursday night’s event at Edinburgh International Conference Centre was a who’s who of Scottish business, believed to be Britain’s biggest business awards and the biggest sit down banquet in Scotland since the coronation of King James VI.

The Large Business of the Year Award is one of the most hotly contested of the 21 accolades awarded during the event.

Buzz before the awards reached fever pitch thanks to the involvement of Hollywood A-lister and renowned humanitarian, George Clooney who was the star guest at the event.

Guests were treated to more than an hour of storytelling from the decorated movie actor, screenwriter and producer during an interview on stage with broadcaster Chris Evans.

The awards ceremony itself was hosted by TV comedian Rob Brydon and other notable guests were Sir Chris Hoy and Judy Murray.

Guests also took part in a charity fundraising auction, which featured stunning prizes such as lunch with Arnold Schwarzenneger and golf with former US President Bill Clinton. Overall, the event is expected to contribute more than £1 million to a range of good causes. 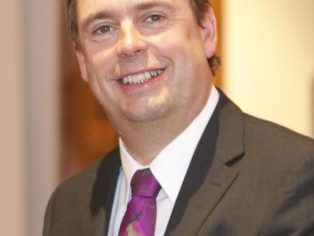