A housing regeneration project in Gateshead has won a top national award.

Phase one of the Trilogy development in Saltwell scooped the Best Regeneration Project – over 71 homes – at the Inside Housing event, staged at The Brewery, central London.

The new homes were delivered by Gateshead Regeneration Partnership (GRP), a joint venture involving Gateshead Council, Galliford Try Partnerships North and Home Group. The development is part of a wider £350million initiative to improve the choice and quality of homes in the borough.

The Trilogy I project involved replacing pre-war semi-derelict houses and flats with 99 striking new homes and communal gardens. Of these, 20 went for shared ownership, 18 for affordable rent and 61 for private sale, through Galliford Try’s house building division – Linden Homes.

As well as new homes and an improved streetscape, the project gave 11 unemployed Gateshead residents the opportunity to get back into work and created three apprenticeships.

Sean Egan, Managing Director with Galliford Try Partnerships North, added: “This project has proved to be a real winner. Not just in the housing industry but for the community too. It has delivered high quality homes and real regeneration, transforming the local environment and economy – all goals which are at the heart of our delivery strategy.”

Cllr. Malcolm Brain, Cabinet Member for Housing at Gateshead Council, said: “We’re delighted that the first phase of the Trilogy development has been recognised on the national stage.

“The project is a fantastic example of what can be achieved with a strong, collaborative working relationship between the council, developers and the local community. Over the last 10 years we’ve removed homes that were no longer fit for purpose, created local jobs, improved the environment and provided modern affordable homes that local people are proud to live in.”

Christine Curran, Development Director with GRP said: “At the beginning of the project, some people claimed that the homes would be out of the reach of local people. However, 76 per cent of buyers have moved less than five miles to a new home at Trilogy I. Over 60% of our new home sales were to first time buyers and it is fantastic that we have been able to offer the opportunity for local people to get onto the housing ladder.”

Brian Ham, Home Group’s Executive Director, Development, said: “This is great news indeed. It’s fantastic to have the partnership recognised for the outstanding work it is doing in adding to the already growing number of attractive and affordable homes for people in Gateshead. It’s also another step forward in Home Group’s mission to build 10,000 new homes by 2022.” 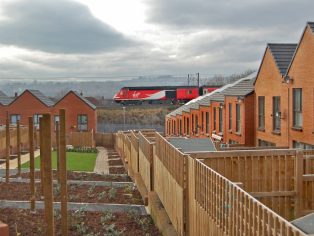