Grassroots ‘people power’ is at the heart of the breathtaking transformation of a West Midlands former council estate – and a local district nurse was one of the key drivers who brought the project to fruition.

Early pioneers
Wendy Bodenham is one of the group of pioneering local people who fought for the regeneration of the run-down Lyng estate and set up Lyng Community Association (LCA), the registered social landlord which has spearheaded the redevelopment plans.

LCA has since worked in partnership with Sandwell Council and, in more recent years, with developers Barratt West Midlands on the multi-million pound scheme, which has breathed new life into the estate.

In the first two phases, LCA built 86 houses and apartments. The third and final phase, which started in 2010 and brought Barratt on board, has involved building another 114 affordable homes and 250 for private sale.

Work is nearing completion and the final ten new LCA homes will be handed over by October 2015. A popular new children’s play park has also been created, as well as public open space for residents to enjoy.

Time for change
The old Lyng estate was built in the 1960s and its design was typical of that era, with a mix of maisonettes, flats, tunnel walkways, underground car parks and areas of public open space.

But over the decades, as the buildings started decaying, so did the estate’s reputation. Being part of a neighbourhood that had been home to generations of families and which prided itself on the strength of its community spirit, local residents rallied round to save their cherished estate and – along with their local councillors – called for action to rejuvenate the Lyng.

In 1999 work began to demolish those homes not meeting modern standards and, by 2003, clearance of the 980 flats and maisonettes was complete, paving the way for smart new homes and a whole new era.

Early days
Wendy became involved in plans to redevelop the Lyng when the transfer of council tenants – including one of her patients – to alternative accommodation in preparation for demolition of their homes began.

After attending a meeting about how best to rehome people with specific health needs, Wendy ended up joining the group of tenants working with the council to decide what the new estate would look like – and what would eventually become the LCA. She explains:

“I remember thinking ‘How can I do this? I don’t have any housing, planning or legal experience or relevant qualifications.’

“I was interested in what they were doing and I did know about the health side of things and about social needs.

“Our early meetings were very amateurish – there would be no agenda or designated Chair – we were just a group of people with a common passion.”

Over the next few years, members undertook various training to help them interpret architectural drawings, get to grips with planning law and understand the various rules and regulations governing development matters.

“In the early days, nothing seemed to go smoothly. There was lots of red tape and we had to deal with various changes in regulations.

“There was also some bad feeling because a few people questioned why West Bromwich was getting a lot of money spent on it when other areas deserved it as much, so we had to justify what we were doing and prove it would all be worth it.”

She and her fellow campaigners successfully negotiated the rules to give the group charitable status and established the LCA as a registered social landlord in 2000 to own and manage affordable homes for rent on the Lyng.

They then moved on to the nitty gritty of the planning and design stage of the first phase of the Lyng redevelopment.

“It was a steep learning curve and none of us really knew what to expect. It was quite a battle but our two local councillors were very supportive and we all felt very passionate about the estate. We were determined to make sure our social housing would be of a good quality and that the Lyng would be a desirable place to live.

“We had a rule in our meetings with architects and builders – no jargon, no abbreviations and everyone had to speak in plain English – because we were ordinary people dealing with technical professionals so we didn’t want to be bamboozled by them.

“And one of the first things we did was make sure there was an agreement that tenants on the old estate who wanted to move back had first priority for the new homes.

“Things were going well but the credit crunch couldn’t have come at a worse time – everything came to a halt for a while and we were in limbo. At times, we thought we would never see the redevelopment completed and a lot of people lost their enthusiasm and motivation – it was a tough time but we had to keep faith.”

Adapting to change
To kick-start building work again, the LCA and Sandwell Council went into partnership with private developers Barratt for the final phase of development.

The LCA played its role in the tendering process for a new partner and, once this was agreed, the group again worked hard on plans and designs, successfully negotiating to ensure the finished estate has colour and character with varied materials and height to the buildings.

“We have also ensured that our homes are mixed in with private properties to create an integrated community. As residents, we want the place to look good and be somewhere people want to live.”

The LCA is developing its work in strengthening the Lyng’s community spirit by organising a programme of events and activities to benefit and bring together local residents.

Recognition of what the LCA has achieved so far was highlighted in a recent tenants’ survey, when 85 per cent said the Lyng was ‘a great place to live’, 71 per cent reported ‘good community spirit’ and 83 per cent had a ‘good feeling’ about the future of the estate – compared to just 58 per cent in a similar survey carried out in 2010.

“It has been a long journey, with plenty of obstacles to overcome, but I am very proud of what we have achieved. I enjoy what I do here and there is still more to be done. I get a buzz when I look at our new homes on the Lyng and think ‘we did that’.” 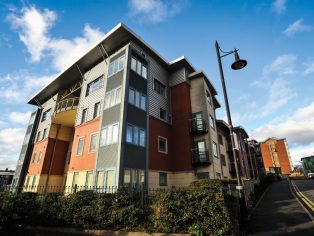