Stewart Thompson of Global Energy Systems looks into the Green Homes Grant, and how small builders can reap the benefits of an increase in energy efficient projects.

Following on from the Government’s commitment for the UK to be carbon neutral by 2050 – and to stimulate the market post Covid-19 lockdown – Government has launched a new funded scheme for the installation of energy efficient measures.

Through the Green Homes Grant (GHG), homeowners and landlords in England can apply for a voucher which will financially contribute towards the cost of installing energy efficient measures like insulation, and low-carbon heating improvements to their homes. Up to 600,000 households could save up to £600 a year on energy bills.

The Government will provide a voucher that covers up to two thirds of the cost of qualifying improvements to a home. The maximum value of the voucher is £5,000. However, homeowners may be able to receive a higher level of subsidy if they are or a member of their household receives one of the qualifying benefits. Landlords cannot apply for the low-income part of the scheme, but can claim the £5,000 voucher.

The process is very simple to apply for; applicants must simply answer some basic questions about their property and the improvements desired, attach a copy of a quote (you must be a registered installer), and if accepted a voucher will be issued to the client. You can then redeem the voucher and ensure improvements are completed by 31 March 2021 or the voucher expiry date, whichever is sooner.

Homeowners and landlords are paid quarterly for seven years, but the carbon savings are accounted for over 20 years which is the estimated life expectancy of a good ASHP. To claim RHI, the applicant needs to apply via OFGEM.

Clients can claim both the Domestic RHI and the Green Homes Grant, however they must claim the GHG first and then claim for the RHI once their GHG voucher has been redeemed. Because both the GHG & RHI are taxpayer funded, and to avoid ‘double dipping’ into the public purse, applicants will have to declare that they already received funding from the GHG. This value will be deducted from their RHI claim.

With 32 per cent of carbon emissions produced by heating buildings in the UK and almost 80 per cent of a homes energy output being used to produce heating and hot water in our homes, using a low carbon renewable heating system is key to the country achieving NET Zero.

As the production of electricity becomes even cleaner through the use of renewable generation, air source heat pumps are seen by the Government as part of the solution. ASHPs can save up to 60 per cent carbon emissions compared to condensing gas boilers – even higher when compared to oil and LPG.

ASHPs can also help property developers and builders comply with the latest Building Regulations, futureproofing properties as the country is decarbonised and moves towards an electric economy.

Yet another benefit of installing ASHPs to the new build market is that no more expensive gas connections to the site are needed. A good ASHP can provide all of a home’s heating and hot water, even down to outdoor temperatures as low as -20oC.

INCENTIVES FOR HOMEOWNERS
There are some great financial incentives to help homeowners adopt low carbon technologies such as Green Homes Grants and the Renewable Heat Incentive – in turn bringing you an uptake in projects as an installer.

Forward-thinking developers and builders who want to save carbon as well as money on their energy bills can also choose low carbon heating systems prior to the Government’s Future Homes Standard, which will see the installation of fossil fuel boilers banned in 2025. 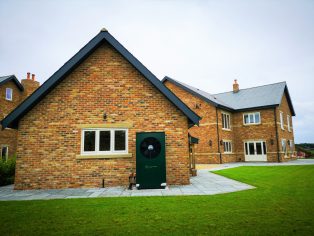