Terry takes pride in his work with Persimmon Homes

A Ross-on-Wye family has plenty to celebrate as not only do they all work together for a regional builder but their father has just won a national award.

Dedicated site manager, Terry Cole, from Persimmon Homes South Midlands has been named among the top 100 site managers in the UK after bagging himself two top awards from the National House Building Council (NHBC).

Terry was the site manager at Persimmon Homes’ development Chase Wood View in Ross-on-Wye, underwent a rigorous selection process before being selected by a panel of judges for the quality and high standards that he set on his site.

Terry was formally awarded a Pride in the Job Award on October 16 2015 and beat off stiff competition from 18,000 site managers to receive the Seal of Excellence Award, a much- sought after accolade in the construction world.

The awards coincides with Terry celebrating 33 years at Persimmon Homes and he was very proud to highlight that all three of his sons now work for Persimmon Homes South Midlands and had in fact worked at the Chase Wood View site.

“When my name was announced at the official NHBC Awards Ceremony I was left speechless.

“I have always taken great pride in my work and set myself the goal to achieve a Pride in the Job Award in 2014 and follow up with a Seal of Excellence Award in 2015. Now that it is a reality, I can’t believe it.”

“It has been a real family affair at Chase Wood View, my son, Danny, worked alongside me on-site and was so impressed by the location and quality he bought one of the houses. My youngest son, Alex, developed an interest in construction when he visited my site office after school and has subsequently secured an apprenticeship at Persimmon Homes.”

“We are extremely proud of Terry’s achievements. He is a fantastic site manager and ambassador for Persimmon and we have really appreciated his hard work and loyalty over the last 33 years.

“It is great to see the next generation of the Cole family joining our workforce and I hope that they enjoy as much success as their father.” 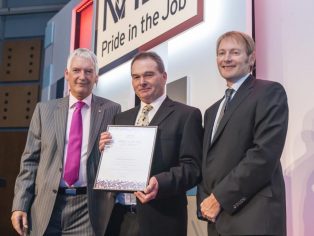