Countryside, one of the UK’s leading home builders specialising in placemaking and regeneration, together with Poplar HARCA has completed the final phase of works at St Paul’s Square in Bow, London – two years ahead of schedule.

The state-of-the-art development on the former Leopold Estate, which began work in the height of the recession in 2008, consists of 486 new and 335 refurbished tenure-blind homes, of which 35% are affordable, around landscaped courtyards. The scheme offers spacious one to four-bedroom apartments, three and four-bedroom maisonettes and a six-bedroom house all with generous outdoor space including communal gardens, terraces and balconies.

The scheme also includes 10,000 sq ft of community and office space and public realm. The new public realm includes the Leopold Walk which has transformed the local streetscape, improving north and south views. New artwork and road names celebrate the rich heritage of the area, including heroes of the 1921 Poplar Rates Rebellion and the suffragette movement.

Located in one of the most vibrant part of East London, St Paul’s Square is well connected with transport links to the City, West End and Canary Wharf. There is also an array of local amenities and an abundance of green open spaces.

“We were fully aware of London’s acute shortage of housing especially for first time buyers trying to step onto the ladder. Despite being in the middle of an economic recession, we were determined to progress work at St Paul’s Square in 2008. Thanks to strong partnerships with Poplar HARCA and the London Borough of Tower Hamlets, detailed planning and precise execution, we were able to navigate through difficult times and deliver something truly special.

“Aside from creating high quality homes and replacing outdated housing on the estate, we have kept the hearts and minds of the local community at the centre of our work and delivered some fantastic new communal facilities. The feedback from both existing and new residents has been overwhelmingly positive, which proves this is a fine blueprint for future schemes in and around the capital.”

“The Leopold Estate was looking tired and outdated but having worked closely with Countryside and the London Borough of Tower Hamlets, we have created a truly inclusive neighbourhood in this part of East London. Having consulted with the community at every stage of the process, the area is now a thriving community with a sense of belonging and wellbeing.” 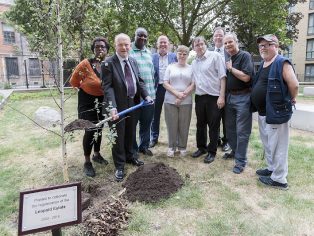