Cali Construction from Glasgow Caledonian University have won the third annual CIOB Global Student Challenge competition. They collected their award from CIOB President Paul Nash at the President’s Inaugural Dinner on 15 July, having beaten five other finalist teams to the award.

They will also receive £2000 in prize money along with access to mentoring from industry leaders who will offer advice and guidance with their professional development. In the final, held at the Grand Hyatt Hong Kong, Cali Construction held off the challenge from five teams from around the world in the process of becoming champions. Alongside the UK, the other countries represented in the final were Australia, Hong Kong, South Africa and China.

The annual CIOB Global Student Challenge invites teams to compete at running a virtual construction company in a simulated environment using the MERIT software. Developed at Loughborough University, it has been used to train young professionals since 1988 as part of in-course modules in degree programmes. The software enables students to develop business management skills, requiring them to take decisions on staffing levels, estimating and bidding, managing cash flow and capital and seeking investment opportunities.

Around 50 teams from universities all over the world entered the 2016 competition, which began back in March. After six rounds of competing the top six ranking teams travelled to Hong Kong for the finals on the 10 to 15 July.

“Winning topped off what was a fantastic event. Everyone involved was part of something very special. Our team had a real blend of personalities, but with a common purpose. The clear strategy, listening and compromising gave us our best results.” 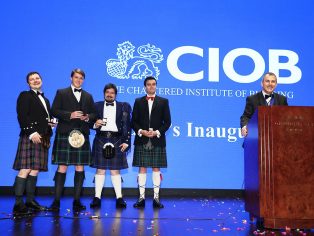