A comprehensive survey and design exercise by a leading structural engineering practice has helped reduce costs and transform a disused mill into a luxurious new residential accommodation building.

Greater Manchester-based Rhodes & Partners undertook the work on the Grade II listed building in Derbyshire, and devised a solution which helped minimise the need for costly temporary work by utilising as much of the original structure as possible.

Rhodes & Partners’ Technical Director, Peter Graham, explains that a good proportion of the building was derelict and it appeared that a significant amount of temporary works would be needed for the restoration:

“Part of the structure had suffered a high degree of deflection, but we were able to design a detailed system of cross-bracing which stabilised the building and allowed the refurbishment to proceed.

“We worked with the property developer and the contractor to devise a structural engineering design that would allow as much as possible of the original structure to be repaired rather than replaced. This eliminated a significant amount of the temporary works which would otherwise have been needed. There were obviously some areas where we had to make compromises, but the end result was far more cost-effective than the alternative.”

A river runs directly below the mill in a series of channels, and the potential for flooding was a major consideration. Peter adds:

“Our design proposal included the cleaning out of the channels, some of which had failed. By re-using these channels, we were able to ensure a flow capacity that was more than adequate, even in flood conditions, so that the river could remain undisturbed beneath the building.

“A major project such as this is always challenging and complex, but we have considerable experience in working with all the various parties involved and creating successful solutions. Where a building such as this has a Grade II listing there are obviously many restrictions that have to be observed, but we were still able to create a detailed structural engineering design that helped ensure a successful outcome.”

The completed development now offers a selection of luxury apartments. 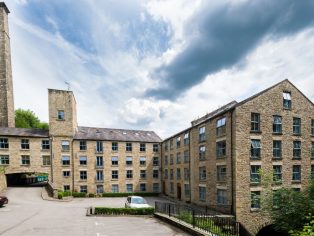