Developer Southern Grove has today unveiled a £7million project to create a series of mews houses in a popular residential area of north London.

The scheme, called Powys Grove, will create nine family homes in the heart of Enfield.

The announcement comes just a month after the company revealed it had succeeded in winning planning approval for another development of mews houses on a similar infill site in Finchley.

Powys Grove will be a continuation of Southern Grove’s determination to take full advantage of the huge stock of infill sites across London, which it believes have the power to provide a large proportion of the family housing that the capital needs. As the company enters 2021, it will be redoubling efforts to identify a large pipeline of suitable sites that fit this description.

Its latest terrace-style scheme will provide a single 2-bed house, seven 3-bed houses and one 4-bed property over three storeys, on a site currently occupied by a row of disused garages.

The development, designed by Dowen Farmer Architects, is located on Powys Lane. It is minutes away from Broomfield Park and has fantastic transport connections, with Arnos Grove Tube station and Bounds Green Tube station just 10 minutes away. James Burke at Colliers International is advising Southern Grove on this asset and others in the pipeline.

The company began assessing the feasibility of developing infill sites across the capital last year, because they are so numerous and have the power to dramatically increase the stock of family housing in sought-after residential areas. They have historically been under-utilised by developers because of an industry bias towards projects that possess greater economies of scale, but that disadvantage can be more than offset by the speed at which infill sites can traverse the planning process.

Southern Grove will continue to expand the use of infill sites alongside its other large-scale residential developments of apartments, featuring hundreds of affordable homes.

“There is high demand for family housing here. The infill site we have selected is a classic example of land that has sat poorly used for many years, ignored by developers who too often prefer larger, more generic sites.

“However, London needs housebuilders to be a bit more imaginative. If our approach is replicated at scale across London, thousands more family homes will spring up, dramatically increasing the pace of building. As an industry, we must make better use of infill sites, the transformation of which are usually very well received by planning departments and residents.

“We have another two infill sites in the pipeline and our eyes on many other opportunities that show similar potential. We’ll be making a number of further announcements this year.” 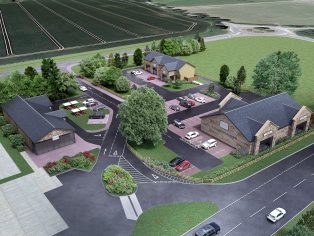