Ryan Blake of Harvey Water Softeners details the dangers of hard water, and explains the techniques that can help developers attract customers seeking the benefits of softer water

With any new build or renovation project, the main focus for developers or specifiers is usually to get the project finished on time and – more importantly – within budget.

However, there’s one consideration which could make the difference between costing any future homeowner thousands more in new appliances in years to come, or them saving that money instead. That difference is the hardness of the water.

Not all tap water is the same. Depending on location, mains water contains different levels of minerals such as magnesium and calcium, either naturally occurring or artificially added, for reasons of health or taste.

Generally, the higher the levels of minerals in the water, the harder it is, and the more important it is for developers to take note.

When building or renovating in hard water areas, it pays to know. Developers need to be familiar with the impact limescale can have in kitchens and bathrooms on taps, shower screens, appliances or any surface that regularly comes into contact with water.

Caused by the minerals in the water, limescale can quickly cause an unsightly mess, and make a dream development look worn out in a matter of months.

Limescale from hard water is not just a fact of life to be lived with. If left untreated, it can cause real damage to appliances and heating or hot water systems too. Any device with a heating element that uses water is affected. When those appliances are brand new, exposing them to hard water is little different to throwing money down the drain.

There are hard water maps available online which can give a good rough indication for each area, but a water testing kit will give a more exact reading on a house by house basis.

In order to counteract hard water problems, a water softener removes hard minerals from the mains to prevent limescale from forming. It protects new appliances inside and out, making them last longer with fewer longer-term maintenance issues, and keep things looking better for longer.

They can also remove existing scale build up in older properties. An ageing hot water cylinder can typically be made limescale-free in six months, or a kettle or shower head in six weeks. System pipework can take a little longer – up to two years depending on how much scale has been allowed to build up – but the difference it makes can be significant. Not quite ‘box fresh,’ but close!

The higher the spec of the kitchen, the greater the consideration that needs to be given to water hardness. Price-wise, water softeners are a similar investment to other ‘white goods’ appliances that get frequent use day after day. So adding them into the budget for an already significant renovation, redevelopment or new build makes sense for lots of households.

They can be installed quite easily – normally only a few hours’ work – at the same time as a kitchen or bathroom refit. For new builds, they can be bought and installed before Building Regs are signed off to save on the VAT.

However, with non-electric softeners, there’s no ongoing servicing requirement as there is with a boiler.

Modern mains pressure hot water systems require a water softener with a higher flow rate – especially if there are going to be features like rainfall showers in the bathroom or a boiling tap in the kitchen.

Water hardness varies from place to place, so whether water softeners are right for each project depends very much on the location. The benefits of softened water extend beyond appliances to skin conditions, savings on cleaning and bathroom products, and more.

When specified, it pays to earmark the space for the softener in the designers’ plans from the start, just like any other feature. Space is usually at a premium, especially in older houses where the purpose of the work is to create more living space. However, there are some softeners which can be fitted internally or externally with the right purpose-built cabinet to protect it from the elements.

For builders or developers, it can keep customers satisfied with your work for years longer, so it’s certainly something to consider. 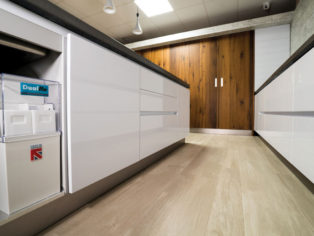