A Persimmon Homes site manager has been shortlisted for a top construction industry award.

Peter Mitchell will be representing the Yorkshire region at the national Building Excellence awards, run by the Local Authority Building Control, (LABC).

Having been in the construction industry for more than 30 years, Peter, who is based at the Westfield development, was nominated for the ‘site supervisor of the year’ category by the LABC itself.

Looking forward to the national finals in November Peter, from Hull, said:

“I am delighted to have been nominated for this award, especially as it means I have been recognised by independent experts for the quality of my work.”

“I have been managing the Westfield development in Malton for more than two years since we started in early 2012 and it’s now over halfway complete. I am even happier to be going to the finals since this is the first year the site supervisor of the year category has been introduced to the awards.”

Peter began in the industry as a carpenter and developed his expertise by moving up the career ladder. Having worked for various housebuilders, Peter has dedicated the last 13 years to Persimmon Homes Yorkshire.

“We are very proud that Peter will be representing the Yorkshire region. This is testament to his hard work and commitment. We would like to wish him the greatest success in the final.”

The LABC’s Awards for Building Excellence is designed to recognise and reward the hard work of registered developers, builders and individuals who stand out from the crowd in delivering high quality construction and design. The LABC’S grand finals will be held in London on Tuesday 11th November 2014. 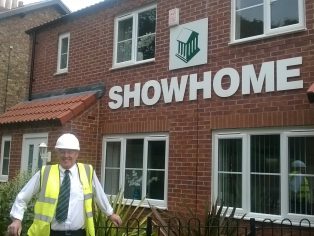