Sheffield’s public art programme, an integral part of its award winning streets and public spaces, has been bolstered by a big commitment from a major city developer.

Sheffield Housing Company has promised £53,000 of proceeds from the first phase of development and there could be a similar amount from phase two, which is scheduled to begin in the summer.

In total the developer hopes to donate £175 for every one of the 2,300 homes it plans to build. That would deliver up to £400,000 to create striking public realm in the vicinity of its developments.

The joint venture company, involving the city council, regeneration specialist Keepmoat and Great Places Housing Group, plans to build the new homes over the next 15 years.

Currently just over 300 homes are being constructed at Brearley Forge and nearby Brearley Springs in the Shirecliffe area and Cutler’s View in Norfolk Park. Plans are being prepared for the next phase of approximately 500 homes in Fir Vale, Manor, Parson Cross and further properties at Norfolk Park and Shirecliffe.

“Our prime objective is to provide modern, spacious and energy efficient homes to improve and widen the housing choice for the people of Sheffield. However it is also important that these homes are part of attractive neighbourhoods.

“By investing in public art initiatives we hope to create unique environments in which growing communities can take pride and develop a sense of ownership.”

Exactly how and where the money will be spent has yet to be determined but the city’s Public Art Officer, Andrew Skelton, has been tasked with developing the programme. He said:

“We will select artists with a sound track record of this type of commission and they will be engaged to work with the new communities to produce works which will add quality and craftwork to walls, landscape features, gateposts and markers.

“We hope to have some initial concepts developed by the summer to share with local groups and individuals and get them to work with the artists to turn these into deliverable designs.”

“We are delighted to see this programme, which will play an important role in creating unique places for people to enjoy and will also add significantly to the city’s arts and cultural offer. Public art gives people the opportunity to be involved in the changes to their local area so it’s great that Sheffield Housing Company is creating homes and communities – not just houses.”

Public art has contributed to the overall design and high quality of Sheffield’s award winning public spaces, including the Peace Gardens, Sheaf Square and Tudor Square. The richness and craft skills that artists bring, helps to make distinctive, well used and loved spaces.

Working with communities the artists often draw on the history and local character of the area and their work can be seen in schools, public and private buildings, parks and open spaces. This has resulted in a string of honours including the Academy of Urbanism ‘Great Place of the Year 2010’, Civic Trust and Royal Town Planning Institute Award.

The fundraising target has just been reached for a memorial to the Women of Steel which will honour the women who worked in Sheffield’s steel works and factories during both World Wars. The bronze statue, which has been designed by leading sculptor Martin Jennings, will be sited outside the City Hall in Barker’s Pool.

Sheffield Housing Company is building a mixture of two, three, four, five and six bedroomed properties with the latest home energy saving systems and living-space enhancements which can be easily modified as residents’ needs change – making them lifetime homes. No other developer in the city is building to the exacting standards specified by the housing company. 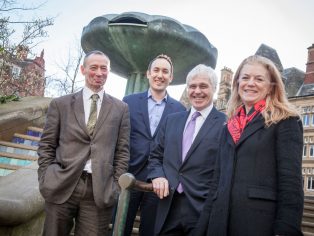