Scottish households estimate that they spend over £1,000 per year on heating bills, more than anywhere else in the UK. Yet two thirds (65%) still feel cold at home according to new research from Barratt Homes.

According to research, the biggest influence on heating bills is the age of the property. Typical new-build homeowners save on average £600 per year when it comes to heating bills.* And the gap between old and new is growing – a recent calculation from Government suggested that new build homes are 30% more efficient than even five years ago.

Rather than reaching for the thermostat, the research highlights other ways in which homeowners are keeping warm in winter months include putting on extra clothes (68%), having a hot drink (54%) or cuddling up with their partner, children or pets (28%). An active 6% resort to exercising indoors to help boost their temperature.

The research also showed that for one in five Scots (22%), the bedroom emerged as the coldest room in the house, with the hall a close second (18%).

Region and Coldest feeling room in homes across the UK

Barratt Homes conducted thermal imaging of both a pre-owned and new build home, highlighting the significant differences in heat loss.

The lighter colours show that more heat escapes through doors, walls and windows of the older property compared to the new home. Green shows heat lost due to displaced insulation or air leakage through window or door frames.

“Homeowners shouldn’t pay over the odds to stay warm at home, especially as there are many things that can be done to prevent heat leakage. Simple measures such as insulating your home or keeping furniture away from radiators all help to maximise heating use.”

“At Barratt, we use smart techniques, such as airtight doors, high quality insulation in the roof space, double glazing and high efficiency boilers to make sure draughts won’t cause the winter chills. We’ve also launched an energy saving calculator on our website, so customers can see the savings.”

Estimated heating costs across the UK depend on a variety of factors such as property type and geographic location – with colder temperature in the north reflected in higher bills.

Region and Heating cost per year 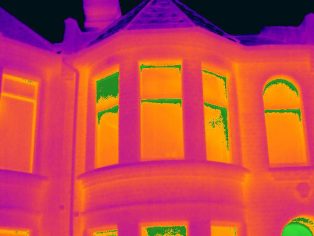