The management skills developed over a successful career in the Royal Marines are now being applied in the operations of leading timber frame manufacturer Stewart Milne Timber Systems.

Nick Lindley, a former Colonel in the Royal Marines with a degree in quantity surveying, has joined the firm as Head of Planning, based at its Witney plant in Oxfordshire.

In his new role, Nick will take a business planning lead to complete the implementation of a new change programme and join up the sales, commercial, contracts and manufacturing operations within the company. He will report to UK Operations Director Noel Staunton.

Having completed his degree in quantity surveying at Leeds Polytechnic, Nick joined the Royal Marines as a means of having an initial career that enabled him to pursue his love of climbing. Although he intended only to serve four years, this turned into a 29 year career. He has now returned to the construction sector after meeting his new employer during a Career Transition Partnership (CTP) recruitment fair, organised by the Ministry of Defence’s official provider of services to assist personnel move into civilian careers.

Nick’s military career saw him attain a series of senior executive level posts, latterly as Director of the Advanced Command and Staff College at Shrivenham, and serving as Commanding Officer of 45 Commando Group at Arbroath for two years.

Commenting on his appointment, Nick said:

“After diverting from my earlier career path in construction as a QS, it is great to be back in the industry with one of the recognised pioneers in the field of timber system construction in the UK. What attracted me to the role and back into the industry is that it has a tangible product and a great range of people involved in producing it, from the teams on site through to the board room.

“I met Noel Staunton by chance at a CTP event and was immediately struck by his enthusiasm and passion for his work and Stewart Milne Group. That is something I’ve found in everyone within the company and is similar to the team spirit that I knew during my military career. It goes to show that one should remain open to all possibilities in your career, as following that chance meeting I am now embarking on a new chapter of professional challenges.”

Nick’s extensive skill set developed in the Royal Marines, spanning people, operations, business and financial management disciplines, comes along with a fresh set of eyes, which are being applied to systems and processes within Stewart Milne Timber Systems.

“My initial training as a QS meant that I understood construction and re-entering the industry from a completely different environment brings the benefit of a fresh perspective, which I can hopefully apply for the overall good of the business. The military invests significantly in personnel development, which has enabled me to develop a wide array of transferable management skills, which are relevant to my new role.”

Nick is one example of how the construction industry can capitalise on the talents of people leaving the Armed Forces in the UK.

“Recruiting someone of Nick’s experience and background is a major coup for us and demonstrates the dynamic working environment that we provide and the attractiveness of our industry to people from other career paths. Nick’s insight to the Armed Forces also reaffirms our belief that former military personnel with relevant skill sets can help us to meet many of the skills requirements within our industry.”

Originally established in 1975, today the Stewart Milne Group employs more than 900 people and concentrates on building quality residential homes and commercial builds for a range of customers including government bodies, private and public companies, local councils and private clients. 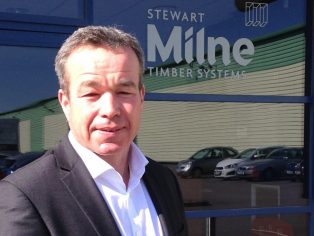