The Royal Borough has agreed funding for stage two of the Maidenhead Waterways project – which will see the York Stream completed and available for leisure use by walkers, cyclists and small craft users.

The decision was taken by the cabinet regeneration sub committee when it met on Wednesday 16 December. It is subject to council approval when it meets on Tuesday 23 February 2016 to discuss its 2016/17 budget.

Of the £3 million agreed, £0.7 million will go towards final works on stage one and £2.3 million towards stage two.

£2.1 million for stage one of the waterway works was authorised by the council in early 2014 and work is nearing completion above the railway line, by Maidenhead Library and up to the Shanly Homes’ Chapel Arches development.

Stage two will see the extension of channel works upstream (to where York Stream splits from Moor Cut at Town Moor) and also downstream to Green Lane (where the two streams reunite) to complete the York Stream arm of the waterway.

Once completed, the flow that is temporarily diverted down Moor Cut will be returned, allowing the York Stream channel to start to re-establish. During this stage a number of planned environmental improvements will be implemented, including the addition of bat and bird boxes and kingfisher perches, to encourage the wildlife to return to this key section of the waterway.

Stage two of the project will also include the construction of a weir, fish pass and boat rollers at the confluence of York Stream and Moor Cut.

The weir is essential, as it will lift and hold water levels throughout the town centre at their final level, allowing York Stream to fill to its full height and depth and as a result new channel edges to be completed. This will enable small craft to use this first 1km long section of the waterway.

It is envisaged that the flow can be returned to York Stream and the water levels raised by December 2017.

“The council is committed to transforming Maidenhead and we are backing Maidenhead Waterways with the cash to continue to move this exciting project forward.”

The overall aim of the Maidenhead Waterways project is to:

Stage two will complete the York Stream arm, which can then function independently, although the full circuit will not be available until the Moor Cut and Bray Cut have also been restored.

“The waterways project is an essential part of the overall vision for Maidenhead’s regeneration, as it passes through several of our Opportunity Areas and will act as a catalyst for the town.

“It will be an extremely important feature as it will create a waterside setting and culture for all our present and future developments. This has proved to be very successful in other towns.

“Eating, drinking, shopping and living alongside this waterway will bring extra life and vitality to our town centre, and confirm that Maidenhead is actually becoming a great place to live and work.”

“This is excellent news for Maidenhead as it will improve the appearance and ambience of the town. As a local ward councillor I recognise the benefits that this scheme will bring to local residents who already live within the town centre and to those who might be considering that opportunity in the future.”

One of the key reasons for funding being agreed now is to ensure the current contractor, Greenford, can continue seamlessly from stage one to stage two, avoiding the costs of demobilising and then remobilising. A separate specialist contractor will be appointed to build the weir.

Continuing with the waterways work avoids any temporary flood risk and the completed ‘ring’ will reduce flood risk further in the long term. Cllr Wilson added:

“Greenford have proved able and reliable contractors so we are happy to continue working with them. This means we can be confident of the quality of the work, and will save on recruitment and mobilisation costs.”

Funding bid
So far, national and European funding has not been forthcoming for the waterways project.

However, Maidenhead Waterways Group (MW) and the council’s funding advisory partner, Our Community Enterprise – Development and Funding, are planning a formal appeal with the objective of securing public donations towards the costs of the Moor Cut arm of the project.

The appeal is expected to be launched early in 2016 and the cost of completing the Moor Cut channel works, excluding the lock, is estimated at £5 to £6million.

“MW is delighted with the council’s decision to underwrite this next key stage of the waterway project, to be delivered through the MW/Royal Borough community partnership that is overseeing the current stage one works.

“This next investment is a major commitment by the council and a welcome vote of confidence in Maidenhead town centre and the overall Area Action Plan.

“It will enable channel works in the 1km long high profile York Stream arm of the waterway to be fully completed – from Town Moor to Green Lane – with the weir holding back and raising water levels in the town centre to their long-term target, allowing the landscaping to be finished and the habitats to re-establish.” 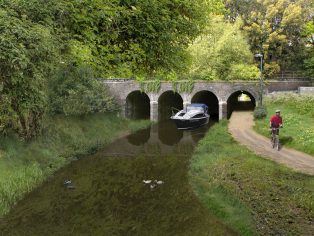 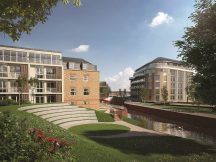