Russell Roof Tile’s Lochmaben site has chosen Dumfries & Galloway Blood Bikes as its Charity of the Year – with a target of raising £5,000.

Located in Dumfries, Moffat and Stranraer, South West Scotland, Dumfries & Galloway Blood Bikes is a charity that delivers essential blood samples and urgent medical supplies to support the NHS, between three hospitals and other healthcare sites in the area.

D & G Blood Bikes was set up in 2015 and now has five bikes, it’s financed solely by charitable donations and doesn’t receive any government funding.  Since it was launched the charity has completed almost 500 urgent runs, to help save lives.

Russell Roof Tiles is aiming to raise the cash through fundraising activities such as the Twin Peaks Challenge, a 1500m run, bowling and a 20km bike ride. The much needed donations will go towards Blood Bikes on-going need for new motorbikes, satnavs and high visibility blood bike jackets to keep the charity running.

In its 50th anniversary year in 2015 Russell Roof Tiles raised £11,000 for Macmillan Cancer Support and Help for Heroes.

“The dedication shown by all of the volunteers is something that everyone should aspire to. The difference they have made in the local community in less than a year is a testament to the work they have been doing and that is one of the reasons as to why we have chosen to work with them.”

“Having Russell Roof Tiles support our work is something we appreciate as we rely totally on donations such as this to help fund our service and help save lives.”

Dumfries & Galloway Blood Bikes has received the support of other businesses such as  Specsavers, Morrisons, Story Construction and Colas.

Russell Roof Tiles is a leading independent roof tile manufacturer that specialise in tiles and fittings. Established in 1892, it has become a prominent firm in the industry and is ranked the third largest manufacturer in the UK by volume. 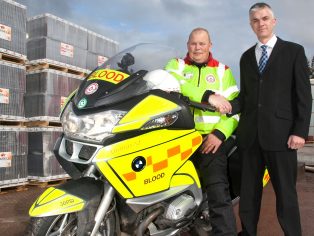