Research commissioned by John Healey MP is claimed to show a failure by David Cameron on housebuilding, with figures showing the number of houses built per year during his six years as PM were the lowest since 1923.

According to the research, an average of 123,560 homes were built across England and Wales per year, the lowest figures since Stanley Baldwin was Prime Minister. This average was 21 per cent fewer than Tony Blair achieved, with a total of 148,149 per year.

“These figures reveal David Cameron’s legacy of six years of failure on housing.”

Figures released by the DCLG earlier in May however told that the number of new-builds had continued to rise since the financial crash, and at the time of publication, newly built homes had been built at the highest rate since 2008/2009.

A spokesperson from the DCLG said:

“The 2008 economic crash devastated the housebuilding industry leading to the lowest levels of starts for any peacetime year since the 1920s. However housing completions are now at their highest annual level since 2009 and since 2010, over 300,000 households have been helped into homeownership through government-backed schemes.

“The Housing and Planning Act will allow us to go even further, delivering our ambition to build an additional 1 million homes.”

The Federation of Master Builders commented:

“On the surface, the house building statistics for Cameron’s premiership don’t reflect well on him but it’s important to remember the economic hand he was dealt and the lessons learned from the failure of his early years.

“Completions were catastrophically low when he entered No. 10 in 2010, with annual housing starts numbering only 125,000, a drop of nearly 100,000 on 2007/2008. In this time, house builders of all sizes were hit hard, but SME house builders in particular felt the full brunt of the financial crash.”

“There’s no doubt that the Government could have intervened earlier to aid these smaller firms as evidenced by the fact that the number of SME house builders declined by around 50 per cent in the years following the financial crisis. As a result, the industry was less capable of responding to the subsequent upturn that accompanied the second half of Cameron’s leadership. Help to Buy was key in the rejuvenation, but it did little to tackle the loss of capacity in the supply side.

“Cameron clearly recognised the dangers of stagnation in the housing market that marked the early years of his leadership, and he put house building and home ownership at the centre of his vision for the country. And in the past two years of his premiership, under the guidance of the then Housing Minister Brandon Lewis, there was a much more determined focus on removing the supply side barriers to house building, particularly in terms of SMEs.”

“The premature end to Cameron’s leadership means that the ambition to truly revitalise the sector will have to be achieved by his successor, who seems to be maintaining his emphasis on new homes.” 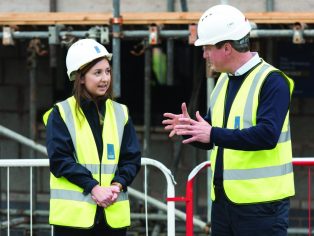