Repairs and maintenance – not necessarily a man’s world

In the housing sector, the world of repairs and maintenance is too often seen as an all-male preserve. But at Sovereign Housing Association, a growing number of women are taking roles in its Property Services teams.

One such is Tanya Perry, one of Sovereign’s Maintenance Managers in the West of England.

Based at Sovereign’s office at Yate in South Gloucestershire, 34-year-old Tanya leads a team of four trade operatives and a lead technician, all men, and manages the planned and reactive maintenance in a patch containing around 900 properties.

“The guys have always been really receptive. I’ve never had any problems, I’ve never been treated any differently – it’s just been a really easy thing for me to do.”

Having started at Sovereign as a housing team assistant eight years ago, Tanya quickly took on new responsibilities as a maintenance team assistant, scheduler and trainee supervisor before finally moving into her role as maintenance manager.

She is one of 58 women working in Property Services at Sovereign and one of 23 in non-administrative roles. As well as six female maintenance managers, there are four area surveyors, an operations manager and a number of more specialist roles.

The most senior woman in Property services is Liane Sheppard, Head of Operations for the West of England.

“A Smith Institute report showed that only 11% of the construction workforce are women, a slight increase, and only 1% of manual trades, which is probably lower that a few years ago. So we clearly have to do more to encourage girls to consider it as a career.

“Having positive role models like Tanya and the other female area surveyors and maintenance managers in the organisation is a positive step, but we need to do more to celebrate success and involve our residents, as I am sure they will be receptive to female operatives carrying out their repairs and maintenance work,” she said.

Sovereign has a goal to increase the number of female operatives in Property Services to five per cent of the workforce by March 2017.

“Women bring different skills and give a more rounded team. At Sovereign, we are looking at projects over the next year to promote the idea of women in construction and property services. That involves linking up with local schools and colleges to raise awareness of opportunities for girls in these trades, and through adult education, encouraging women to consider it as a potential change in career direction.”

Tanya reckons leading her team is much the same as any other:

“Because I’ve always just got on with my job and done it, I’ve never really thought, ‘perhaps this is a bit different for me, being female’.

“From a technical point of view, there were certain areas where maybe I wasn’t as strong because most of the people I work with come from a trade background. So I knew I would have to learn and get better at those things,” she says.

She spent two years on a Bachelor of Technology (BTech) in construction course and then another two working toward her Higher National Certificate (HNC) in construction qualification, in addition to completing in-house management programmes.

“It’s quite tricky to find a balance because the job is quite intense, along with the training, but it’s been brilliant.”

Now she divides her time between the office and the road. She attends meetings, inspections, organises annual maintenance programmes, handles customer queries and works with housing teams, in between managing her team.

“I think if you looked at it on paper – that you’re going to be the manager of a maintenance team – it probably seems a little bit daunting. But I think that definitely as you get into it, it could be open to anybody. I do try to encourage the girls in the office to get on the training programme and do it, because anybody can.

“I don’t think it’s a job that cancels out women at all, with a couple of good courses behind you.”

Tanya says the support she has received from Sovereign has been crucial to her professional development:

“You get such brilliant opportunities.

“It’s amazing, really, when I think of where I came from and what I actually wanted to do, to where I am now – and they’re still trying to push me to look a bit higher and a bit wider at different things I could do.” 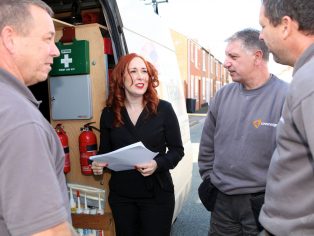