On 11th July, international architect Mick Pearce spoke at a unique cultural event at the University for the Creative Arts (UCA) at Farnham.

In honour of his visit, a day of inspiring talks about development and culture in southern Africa was organised for students and staff by Peter Waters, course leader for Interior Architecture & Design.

“It was a privilege for our students to hear such detail from Mick about his sustainable designs.

“His ability to use processes from nature and transform them into making eco-friendly buildings was inspirational for everyone.

“Today’s event really shows that UCA goes beyond the usual boundaries of Interior Architecture and that we’re engaging with issues around the world which could lead to immense change.”

Renowned architect Mick Pearce is famous for designing the Eastgate Centre in Zimbabwe (1996) and CH2 in Melbourne (2006). Both were informed by the study of termite mounds and plants to create energy-saving buildings inspired by behaviours seen in nature and wildlife.

“I’ve really enjoyed visiting UCA today and think it’s wonderful that the university is taking an in-depth look at sustainability and development in my home country.

“Sustainable architecture is the future of architecture because we have to change the way we use energy and water and I have been encouraged by what I’ve seen at UCA today.”

The event was based around the contacts that Martha Thodhlana had made for her final project which proposes a meeting space for the community in the Eastgate Centre and to build a delegation that will share her innovative development ideas, on behalf of Zimbabwe, at the International Expo 2015 in Milan.

“Today has been a great day for me. It’s taken years to get to this point but I’m so excited to have been able to involve such big heavyweights from Zimbabwe to help with my thesis and try to help make my proposal a reality.

“I think it’s great that UCA has created this day of talks about cultural development in Africa and Zimbabwe because it shows that the University is ambitious and internationally-minded.

“I also think that architecture should reach out and respond to the world around us and it’s great to see that UCA supports my view on this.”

UCA’s Uwe Derksen and Anthony Heywood constructed a ‘Peace Table’ as a centrepiece to the day’s gathering. This has inspired Martha to develop the idea further to build a table, using local Zimbabwean materials representing the five regions of Zimbabwe, as a key feature of her proposed ‘B’andhla’ or community space in Harare. 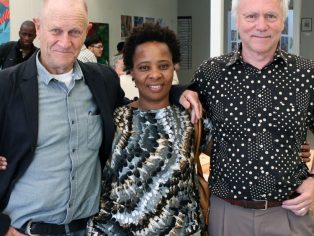