A war memorial – which lists the names of colliery workers who lost their lives during the First World War – has been officially unveiled at the F pit museum.

Mayor of Sunderland, Cllr. Stuart Porthouse, was at the ceremony that saw an important piece of Washington History put back on public display, offering a reminder of the sacrifices that many young men from the area made during the Great War.

“Washington is home to many veterans and memorials such as this are an important part of our shared heritage and also a reminder of the cost of conflict.

“As we commemorate the centenary of the First World War I’m sure Washington residents will welcome the relocation and refurbishment of this historic war memorial. By moving it to the Washington F Pit site we hope that future generations can continue to appreciate it as a reminder of the sacrifices made to safeguard our freedom.”

The memorial was originally located in the entrance of the Washington Colliery Welfare Hall and Institute in Spout Lane, which has now been demolished to make way for a 79 bedroomed Extra Care facility for the over 55’s.

Carved in oak, it was unveiled in 1921 and remained in place until 2012 when the hall – which was by then the London Inn nightclub – closed its doors for the final time. The memorial was moved into storage.

Martin Routledge, Keeper of History at the Sunderland Museums and Heritage Service, said:

“It is fantastic to be able to display this memorial to the F Pit Museum. It was made to commemorate men from Washington Colliery, including the F Pit, so it is fitting place for a forgotten artefact that has needed a new home for some time.”

The redevelopment, at Spout Lane, is being delivered by a partnership involving housing association, Riverside, Sunderland City Council, the Homes and Communities Agency and Galliford Try Partnerships North.

Construction partner Galliford Try donated £1,000 towards bringing the memorial out of storage, having it professionally cleaned and reassembled and then installed at the Museum.

Work on the 3.27 metre by 1.9 metre memorial – carried out by members of the conservation team from Tyne and Wear Archives and Museums – involved steam cleaning and reassembling the marble base, cleaning and bringing out the original wood finish and repairing and replacing missing sections. 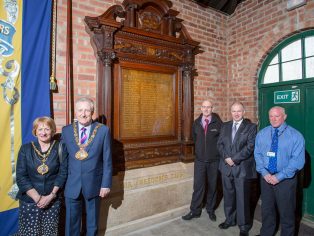