The developers behind an award-winning development in Wiltshire talk to Jack Wooler about how they have included higher-end features as standard, and blended with the historic context.

Somerbrook is a collection of 28 private and 10 affordable homes in Great Somerford, a picturesque village in Wiltshire. Developed by the Stonewood Group – which has Building, Design and Partnerships arms – the project comprises two to five-bedroom homes with a mix of terraced, linkdetached, or detached.

The design employs a traditional style to blend with the adjacent village and the neighbouring Brook Farm – despite the latter, which was established in the 1500s, causing a number of challenges throughout the project.

Intended to set a high standard across all the house types on the development, Stonewood has kept the themes consistent, regardless of house size. That means all homes have generous circulation spaces, higher than average ceiling heights, and a focus on natural light throughout, as well as high spec finishes.

“It is important to us that the core product is at a standard that’s higher than other housebuilders,” says Gavin Calthrop, director of Stonewood.

“That is why,” he says, “we have very few sales extras available, as we include these in the home as standard, for example, underfloor heating and oak floor finishing.”

It is in part because of this high attention to detail that the development won the Federation of Master Builders (FMB) South West House Builder Award, with the trade association hailing the project as Somerbrook “setting the bar high for future projects,” and underlining the builder’s credentials as “a top-tier house builder.”

“Working as part of Stonewood Group, we were first introduced to the prospect of working in new-build development through a former client of our contracting arm, Richard Cherry, ex Countryside Properties,” says Calthrop.

According to the director, the company is always looking to diversify, and so, through him “opening their eyes to the prospect,” the company realised there was a potential to create a “niche, high-quality and community-led scheme” that was in keeping with its core brand values.

“We wanted to find the right location that would enable us to create a quality product that stays true to the Stonewood brand, so we focused on rural locations that would be resilient to market fluctuations,” he continues.

As such, when the opportunity arose to build Stonewood’s first development in Great Somerford, Calthrop tells me it felt like the “natural choice.”

“Working with Stonewood Design and funders the Housing Growth Partnership we feel that we have developed a finished product we can all be truly proud of,” he adds.

When it came to acquiring the land, Gavin says it was fortunate that Stonewood had an existing relationship with the landowners, which ensured a “smooth conditional purchase,” facilitated by Savills.

There was existing planning consent for the land, but this was somewhat obsolete, so the team spent time improving it, to ensure the development was more in keeping with the vernacular of the village.

According to Calthrop, there were some access challenges to overcome with the site access extending through the old farm, but other than that, he reports that it was a “straightforward” site, with little remediation required.

In terms of planning, he tells me the biggest challenge was landscaping and boundary treatments, as the team had to balance requirements around security and policy, while trying to retain the unique character of the rural setting.

With access to the site being a potential issue – especially being through a part of the site which required refurbishment of listed buildings – early engagement and research was needed to ensure a smooth process here.

“Our good relationship with the owners of the farm meant that we were able to work with them to facilitate the phasing plan of the building and accommodate site storage,” explains Calthrop.

He continues: “Due to our position in the Stonewood Group, who specialise in the restoration and refurbishment of listed properties, we were able to seek advice and expertise from our colleagues and navigate this accordingly.”

From a design point of view, the farm provided the bulk of the context for the design of the scheme, and this reportedly became a key selling point for potential buyers.

The team worked closely with ‘partner architects’ Stonewood Design to generate the house types and – “most importantly,” he says – to understand how the scheme would work as a great place to live. This meant plenty of green space, generous gardens and public open space that would add great connections to the existing village.

“In all our schemes we look to the location to give the design cues for our houses and materials. Somerbrook is a mixture of render, red brick and stone which mirrors the village’s material mix,” says Gavin.

As Somerbrook was the builder’s first development in the area, the team went with a traditional construction method, with a range of brick, stone and roughcast render, focusing on high-quality craftsmanship.

As such, Calthrop tells me that Stonewood paid “real attention” to detail on all finishes, ensuring that they were done to the highest standard.

“We have the ambition to be the most sustainable SME developers in the industry,” he assets, “so we are increasingly looking at how we can achieve these same results but with more modern and sustainable methods, and our upcoming development near Cirencester is our first scheme to be built using timber frames,” he says.

This attention to detail continued through the development’s approach to ecology and sustainability, though Gavin says that – given the nature of working within the existing planning consent – the team were “somewhat constrained” in terms of adding value on sustainability focused aspects of the scheme.

However, he says that this development has already given them a platform to develop a sustainability led housing scheme at their ‘Orchard Field’ development near Cirencester, which is reportedly achieving exceptional standards in energy efficiency.

In future, Gavin adds that Stonewood is committed to exceeding the future home standard across all its schemes from 2022 onwards.

QUALITY ACROSS THE BOARD

An example of how the developments wanted to provide a high quality experience for buyers all round, beyond the homes themselves, Stonewood has presented all its buyers with vouchers to the village pub, which also helps to support a local business.

“We then arranged for an all-weather surface to be installed at the Walter Powell Primary School so that their outdoor play equipment could be used all year round,” he continues, “and we also worked with the school on a time capsule project, encouraging pupils to write messages and draw pictures that were placed in a capsule buried in the centre of the development, allowing the students to leave a lasting mark on the community that will be discovered many years later.”

Calthrop tells me that the builder wanted to drive community engagement throughout the development process, while celebrating and promoting existing businesses in the area, advertising them across their social media channels, and in the development’s show home.

“We really feel like we have left a positive mark on the community that will last for generations to come,” he adds.

According to Gavin Calthrop, much of the development’s successes are down to both this strong community engagement, and the collaboration between Stonewood’s subsidiaries.

Over its 50 years of experience, the firm believes close collaboration between its design and building branches enables this family firm to both move quickly, and more effectively, with in-house expertise on every stage of the development process.

It also puts focus on canvassing the views of the community, and as such has endeavoured to engage them throughout the process on this scheme. “Working closely with the communities in which we build is really important to us, as we recognised that by building within a community, we are becoming part of it,” says the director.

According to Gavin, this is why the team made “great efforts” to support local schools and businesses wherever they can, aiming to work in partnership with the locality. “That’s what construction should be about – leaving behind something solid, and enduring.” 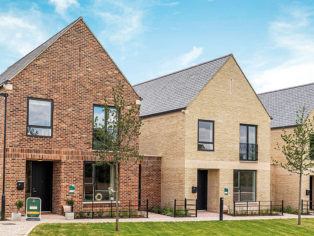