Edinburgh high school pupils have been learning about roles in construction thanks to a new initiative with Scotland’s leading housebuilder.

Pupils from Portobello High School were joined by Barratt Homes last week to take part in an interactive session which sought to demonstrate the range of skills involved in managing a property development site.

The activity, based on a board game, saw groups of pupils act as project managers, working together to make decisions on which land to buy, the customers they were building for, as well as building materials and trades required for a successful development.

As well as showcasing the vast range of careers connected to house building, the session was useful in helping to develop skills in teamwork and budget management. As part of the activity, each decision the group makes has an impact on the teams’ costs and income.

“At a time when many of our senior students are still considering which route to choose after school, experiences such as these help bring roles to life and hopefully inspire young people to find out more.

“It was so useful for our pupils to get an insight into the sheer number of career options available – from bricklayers and electricians to designers and planners. The Barratt Homes team also talked about their own routes into the world of work which was particularly useful for those currently making decisions about their futures.”

The activity is part of the developer’s ‘Building Better Futures’ campaign, which sees Scotland’s largest property developer work with community groups, schools and colleges in the areas in which it currently operates.

The campaign aims to support community development and champions construction as a career through its role as a community partner.
The game was created as a result of activity that a cohort of employees from the Graduate Programme were tasked to design and deliver and is only the third time it has been trialled in Scotland.

Leading the activity was Land Buyer Rachel Wong, together with Customer Service Inspections Manager Eric Morrison and Sales Advisor Martin Kerr. The group will be carrying out a series of outreach activities across the Lothians, Borders and Fife throughout 2017.

“There’s a whole side of the construction industry that young people don’t often get an opportunity to see. While the trades are most well known, we have great people who look after land purchasing, manage planning applications and oversee property sales.

“We want to make sure that we engage with young people entering the workforce to capture their attention and show then that the industry really could be for them. I hope the session helped bring the industry to life and inspired pupils to think about a career in construction.” 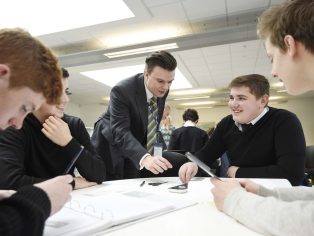