Prime Minister David Cameron and his wife Samantha praised Story Homes’ High Wood Development in Lancaster as they laid the first brick on a new home.

The Prime Minister made the visit in the closing stages of his election campaign on a tour of the North West of England.

“Story Homes is a flourishing company which supports the economy, has created a number of new jobs and built new houses across the North.

“I am delighted to be given the opportunity to lay a brick on the foundation of what will be a much-needed new home.”

The brick was laid on a three bedroom semi-detached property which has already been sold to a local couple using the Government Help to Buy scheme.

Built on the former Lancaster Moor Hospital site, High Wood is a sustainable community of three, four and five bedroom homes with a mixture of detached, semi-detached, terraced and town houses using a mix of natural stone, render and brick.

To meet planning conditions for the development Story Homes worked closely with the Homes and Communities Agency (HCA) on the development which will feature outdoor space and new footpaths and cycle ways linking to the existing networks.

Story Homes Chief Executive Steve Errington said: “It has been an honour to host the Prime Minister.

“Story Homes has grown significantly over the past three years and it has been excellent to receive recognition for the work we’ve done in building and expanding the business.”

Story Homes has recently been given recognition for its customer services from Independent research Company In-house Research which presented  Story Homes with the Outstanding award and the Home Builders Federation customer satisfaction survey, securing the 5 Star Award for a second year running. Story Homes scored higher than many competitors within the industry.

Across the industry other developers have seen satisfaction levels from customers drop due to a higher rate of legal completions than the previous year and many builders struggling to recruit qualified trades. 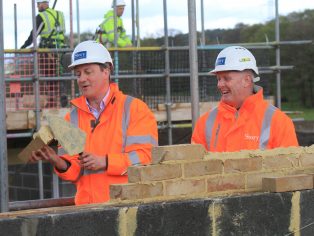