Sugar Quay is a new residential site, currently under development. It is situated in one of the most prestigious riverside locations still to be developed in London on the north bank of the River Thames near to the Tower of London.

The core of the project is the replacement of a 1970s office block with a contemporary mixed-use Foster & Partners scheme. This will comprise apartments built at basement level, at ground floor level and also in blocks of nine to eleven storeys. There will be 165 private residential apartments, as well as studios and one, two, and three-bedroom apartments. Sugar Quay is being jointly developed by Barratt London and CPC Group Limited.

Because of the scale of the project, anhydrite screeds were used to offer the following benefits:

Norcros Adhesives carried out a programme of on-site tests, using the new Norcros Pro Gyp-Base Fast Track Sealer, which greatly reduces the minimum drying times normally applicable for anhydrite screeds. Developed and tested in association with Gypsol, Norcros Pro Gyp Base offers a fast track solution for tiling on to both heated and unheated anhydrite screeds.

Norcros conducted product trials in a 30sq m ground floor area of the building, on a newly laid 50mm thick anhydrite screed incorporating underfloor heating pipes. Full reports from the testing carried out by Norcros Adhesives were issued on 1 September 2017.

The advantage of the Norcros system is that it enables tiles to be fixed with a cement-based adhesive on to anhydrite screeds which have a relative humidity as high as 95 per cent instead of the standard requirement of 75%. The Pro Gyp-Base system negates the requirement to commission the heating prior to tiling. Therefore in the site trial carried out at Sugar Quay, the underfloor heating was not commissioned prior to application of the Norcros Pro Gyp Base system or before tiling. The heating was in fact commissioned in line with industry standards 14 days after the tiles had been fixed.

At the conclusion of the tests there was no evidence of debonding of tiles or cracking of the grout joints in any of the bays and no evidence that the Pro Gyp Base had not worked effectively.

The results from trials, combined with the available historic information provide very positive evidence to support the use of the Norcros Pro Gyp Base system as a fast track solution for rigid tiling on to anhydrite screeds, offering potential for both considerable time and cost savings.

Norcros Adhesives were able to provide full on-site support and technical back-up. This includes on-site training, as well as a full programme of checking and monitoring throughout the installation process which will continue through to occupation of the building. These stages will be supported by Quality Control Inspection and Test Plans, Quality Control Check Sheets and full written procedures. 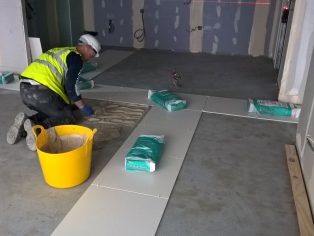