Plans submitted for over 420 homes in Leith

Revised proposals for 425 new homes at the Leith waterfront in Edinburgh have been submitted.

If approved, the homes will be built on brownfield land in Leith’s former docklands and feature 106 affordable homes, 27 studios apartments, 27 colonies, 35 townhouses and 230 one, two and three-bedroom apartments.

The residential scheme forms part of the Waterfront Plaza development which will create a pedestrianised public realm linking the Shore area to Ocean Terminal.

“This development not only helps address the substantial shortfall in housing that typifies the Edinburgh property market, but it will also provide excellent affordable housing in a project with high quality design appropriate to the waterfront location.”

CALA said it had reduced the planned density and added an open public area to the plans after concerns regarding the loss of green space and proposed density were raised at a recent public consultation.

Subject to securing planning permission, the residential development will commence in early 2017. 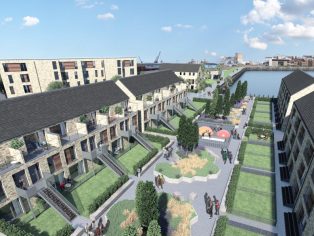