The UK’s leading housebuilder has appointed a dedicated armed forces recruitment professional to help bring ex-service personnel into the business.

Tommy Watson (47) joins Persimmon Homes after 26 years in the army and will be responsible for recruiting hundreds of service leavers into positions across the company’s 24 regional businesses.

“This is a fantastic opportunity for both me and the thousands of people who leave the armed forces every year,”

“In my new role I will work with Persimmon’s 24 regional businesses in England, Wales and Scotland to seek out people who are about to leave the services and who have immediate transferrable skills.”

Greenock-born Tommy joined the Argyll and Sutherland Highlanders at the age of 18 in Edinburgh and as his career progressed to Warrant Officer Class 2, Tommy was later stationed in Colchester, Germany, Folkstone, Northern Ireland, Canterbury and finally in Catterick where he was responsible for training all Scottish division soldiers in the British Army.

After 22 years in Infantry roles, Tommy worked for a further five years helping service leavers resettle back into civilian life. As part of this he helped find jobs for early leavers who had spent up to four years in the services as a lead programme advisor for the Future Horizons Programme.

Prior to joining Persimmon, he worked with wounded, injured and sick personnel as a specialist employment consultant with the Recovery Career Services.

“To meet customer demand we need a robust recruitment programme to bring qualified people into the business. There is a diverse range of opportunities currently available including bricklayers, carpenters and ground workers as well as site management roles and sales positions.

“We recognise that a lot of people leaving the armed forces have transferrable skills and Tommy’s job will be to introduce Persimmon to them and fill some of the hundreds of vacancies we have each year.” 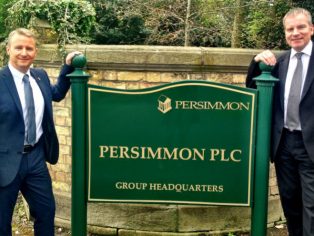