A 42-storey skyscraper in Birmingham has secured planning permission.

At 2one2 Broad Street, developed for rent by Moda, digital-ready apartments, wellbeing areas and a 24-hour concierge are just some of the features on offer in what will be the city’s tallest residential building.

The £183m skyscraper was approved unanimously by Birmingham City Council in twelve minutes. Apache Capital Partners is funding the project and Birmingham practice Glenn Howells Architects has designed it.

2one2 Broad Street will offer a range of apartments sizes, from studios to three-beds, alongside a host of recreational spaces spread across the building. Family-friendly tenancies will offer residents the chance to sign up for three, or even five years, helping to reduce the perception of renters being transient.

Among 2one2’s amenities, a 200-metre outdoor running track – the UK’s first in a residential building – will cater to fitness enthusiasts. The running circuit will sit outside on the podium roof, offering panoramic views of the Birmingham skyline.

The front desk, with 24 hour concierge, will collect Amazon parcels, help book cleaning and ironing, while ensuring residents are safe and secure. Smart lifts that know when you have entered a building are ready to take residents to their apartment as soon as they’ve walked in.

More than 30,000ft2 (equivalent to over 10 tennis courts) of dedicated communal space has been incorporated into the design, including a residents’ lounge, health and wellness zone and a dining club with demonstration kitchen.

Great connections are available to commuters and travellers via the extension of Birmingham’s tram network and the pedestrianisation of the surrounding area.

Moda hopes to ‘revolutionise the way people rent’, intending to create societies within its developments. The company believes it can turn renting from tenure of last-resort into a genuine lifestyle choice.

The developer’s future customers will also be able to organise their daily lives through the bespoke ‘MyModa’ app, allowing them to control smart thermostats, report any problems by taking a picture, and even welcome guests through a virtual Skype-style door buzzer.

After being the first UK housing developer to partner with Uber, Moda is also in discussion with a number of other leading technology companies to help make its customers’ lives easier.

Tony Brooks, managing director at Moda, was “delighted” about the recent consent. “We’re confident high quality rental housing will further boost the city’s fight for talent and investment as companies realise the huge potential the midlands has to offer.”

“Renters have been poorly served by the housing market, and the aim of build to rent is to change that by providing everything people need, from workspace to wellbeing, with a mix of community, security and great service.”

He continued: “People are time-poor, but value experience, which is why we want to take the hassle out of city living through plug-and-play wi-fi, an integrated mobile app and a concierge who’s on-hand to collect Amazon parcels to avoid those dreaded red cards from the postman.”

Dav Bansal, director at Glen Howells Architects, gave comment on the building’s design: “Birmingham’s new addition to the skyline is an important western marker for the city.

“The simple composition with its elegant proportion creates a contemporary and confident design at a key intersection on Broad Street, helping to regenerate this important part of the city.

“The Bronze metal veil over the composed facade of the tower sits on a welcoming podium that embraces high-quality retail, managed workspace, a cycle hub and the main entrance for residents.”

He concluded: “We are delighted to be working with Moda on this exciting opportunity to raise the aspirations of quality housing on the city centre.” 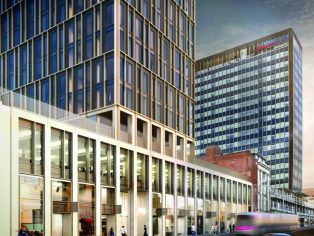