A land agreement has cleared the way for work to start on 81 new homes and further boost regeneration in a former Durham pit village.

The agreement means the Durham Villages Regeneration Company (DVRC) has taken over the site in Sherburn Hill from Durham County Council and started construction of two, three and four bedroomed homes.

There will be 76 properties for sale and five for affordable rent on the development – to be known as the Pastures. The first will be available from late summer. Planning permission for the scheme, on open land behind Front Street, was granted in October last year.

In addition to the new homes, land will be set aside for a new community centre, which will be part-funded by Durham County Council – hopefully with Lottery support. It will also include the creation of a new village square, the relocation and improvement of a play area and the upgrading and adoption of some back streets.

DVRC was set up 15 years ago to breathe new life into old colliery villages which had suffered economic and social decline following the demise of the coal industry. Since then it has delivered a £100 million housing-led regeneration initiative.

The investment in new homes has provided training and job opportunities and a kick start to economies which have then been further boosted by increased populations. Originally a partnership between Durham City Council and regeneration specialist Keepmoat, the joint venture’s area of operation widened when the county council became involved following local government reorganisation in 2009.

“This project has been brought forward on the back of extensive public consultation. We staged a series of meetings and displays, which ensured that local people were fully aware of and able to influence the development plan. It will bring much needed affordable housing to the village, the area and the county.”

“By supporting the development of these new homes, the council not only continues its commitment to provide much needed affordable housing but also the ongoing regeneration of our towns and cities across the county.

“Our involvement in projects such as these makes sure that local communities feel the benefit of developments as well as investing more money into the local economy.”

DVRC has developed over 1,000 homes – of which approximately 25% have been for rent or shared ownership. The homes for sale have attracted local buyers, keeping communities together. Overall 55% of all DVRC sales have been to people living within 10 miles. 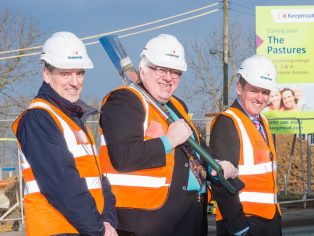