Over 30 new homes to be built in Wavendon

The development will create a fully integrated and mixed tenure addition to the proposed community at Glebe Farm, which has been designed to reflect and compliment the character and appearance of the surrounding proposals and existing Wavendon village.

Lea Valley Developments is a subsidiary of Aldwyck Housing Group and its main business is to generate funding through market sale housing in order to cross-subsidise new affordable housing.

‘We are delighted to be continuing our work with Mears New Homes and look forward to beginning work on the new development. The site, which is due to be completed in winter 2017, will be an exciting addition to the Eastern Expansion Area of Milton Keynes and will provide quality homes in a much sought after area.’

The redundant brownfield site was previously operated by a haulage business and comprises large areas of hard standing for HGV and car parking; along with a number of office and out-buildings.

The project is due to commence works on site within the next few months. 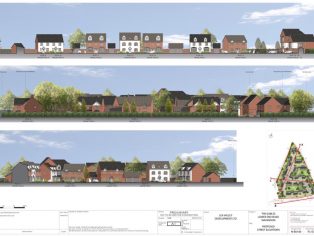