LABC held its annual President’s Reception at Trinity House in London this week during which this year’s President Chris Griffith-Jones announced his successor would be Dave Sharp from Wrexham.

In his formal address outgoing President, Chris Griffith-Jones (Head of Building Control at Winchester), highlighted the significant development the organisation had made in responding to the Grenfell Tragedy and consequent Hackitt Review.  This included:

“This year has proven to be the most significant year in LABC’s history. The current building control system’s weaknesses have allowed people to exploit its loopholes.  This is why LABC and its members agreed with Dame Judith Hackitt’s Review of Building Regulations and Fire Safety and have called for all 53 of her recommendations to be implemented.

“But that’s not enough.  During my Presidency LABC has been honest and open in working with other disciplines and professions to identify change in practices without waiting for government.  Our investments in standards, competency and qualifications is an example.  It is a step-change.  Also, our joint work with other reputable organisations in the sector has shown that there is value in cooperative working.  Now we want the Minister to back us up by implementing Hackitt’s 53 recommendations.

“The overwhelming majority of professionals have pledged their support for the systemic change the Final Report described. So to help build momentum and to get the ‘culture change’ right now, BBA and LABC have created the 100% Hackitt forum for coordinating initiatives between disciplines and individual professionals.  I urge everyone in construction to sign up”. 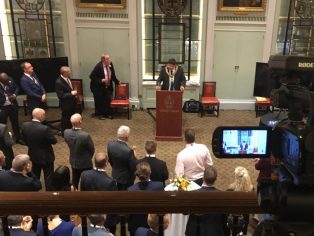