Our rural communities are missing out

Patrick Mooney, housing consultant and news editor of Housing, Management & Maintenance says that rural schemes are being built without vital infrastructure in the current rash of permitted development conversions.

In trying to inch its way towards achieving the near mythical figure of 300,000 new homes built in a year, the Government is risking the sustainability of small, rural communities by allowing countryside developments to proceed without any contributions being made to local services or facilities.

The fear is that villages and small market towns in the shires will miss out on receiving a boost to their already overstretched infrastructure, causing them to be overwhelmed by demands on health, leisure and educational resources from new residents.

This stark warning is laid out in a critical report from the Local Government Association, which accuses the Whitehall Government of riding roughshod over the views and needs of local residents. With a new Planning Bill expected to be published later in the autumn, the LGA, which represents councils in England, has highlighted that recent changes to planning laws have already had a hugely detrimental effect.

At the last election the Government set itself a target of achieving 300,000 new homes to be built in a year by the mid 2020s, but with current rates only delivering 225,000 new homes and the achievement date slipping to 2028 or later, there are fears that Ministers will be tempted to further diminish the influence of local residents.

This is at odds with research from the LGA which found eight in 10 residents want to be able to have their say on all new homes built in their local community. Concerns remain about the quality, design and safety of new homes built with permitted development rights, as well as the location of this type of housing.

Latest figures show more than 1.1 million homes given planning permission over the past decade are yet to be built, and councils are approving nine in 10 planning applications. There is also land for more than one million additional homes already allocated in Local Plans which developers have not yet brought forward to the planning application stage.

The LGA is calling on the Government to introduce measures to incentivise developers to build housing more quickly, for example, by giving councils powers to be able to levy full council tax on incomplete properties, as recently supported by the Housing, Communities and Local Government Committee.

Meanwhile on the vexed issue of the threats faced by small rural communities, changes to existing planning laws have allowed a surge of almost 225 per cent in new homes created by converting barns and farm buildings without planning permission in the past five years.

Figures collected by the LGA show that 734 homes in England were created as a result of agricultural to residential conversions in 2019/20 under permitted development rights, which allow developers to bypass the planning system, compared with 226 in 2015/16. As they do not need full planning permission, developers are not required to contribute towards local infrastructure projects, such as roads, schools and GP surgeries, nor do they have to provide any new, affordable housing for local residents.

This in turn has led to problems such as increased overcrowding, unsuitable properties being brought back into use, a growth in homelessness and younger people leaving the countryside for opportunities in bigger towns and cities. New homes in villages are often not relieving local pressures as many of them are being bought as second homes, or as holiday lets.

The LGA is calling on the Government to revoke the nationally prescribed permitted development right, which has also been used to convert nearly 65,000 homes from offices since 2015/16. This alone could have led to the loss of more than 16,000 affordable homes as a result.

Residents are unable to have their say on these conversions to ensure they meet high quality standards and are both sustainable and suitable for their local area. The LGA says that communities having a say on individual planning applications is an integral part of ensuring a locally-led planning system.

It is good that the Government has moved to allay the negative impact on communities of permitted development rights by introducing space standards for new homes. However, concerns remain about the quality, design and safety, as well as location of this type of housing. This also does not address the standards of housing previously delivered under permitted development.

Councillor David Renard, LGA housing spokesperson said: “Councils are absolutely committed to working with the Government to build the housing the country desperately needs. However, it is a growing concern that we are seeing more and more barns and farm buildings in rural areas turned into homes without planning permission.

“Residents in any area need to have the support of strong infrastructure in place, whether that is schools, surgeries or adequate road networks. If developers are not obliged to provide any of these, then there is a real risk some communities could miss out on these vital services.”

He added: “This is why it is really important that all new housing developments go through a locally-led planning system, so these checks can be made with the oversight of local communities. This needs to be at the heart of the Government’s planning reforms, as we await the details of its Planning Bill later this year.”

It is acknowledged that housing pressures in England are intense, with at least 93,000 households in temporary accommodation and 1.1 million households currently on the waiting list for a social home, but the houses we build today will be with us for decades to come and they need to be built in the right places, with the present and future needs of residents very much to the fore.

As well as working to increase the availability of new homes, the Government needs to focus more of its efforts on affordability. This is particularly a major factor in rural areas which suffer from lower than average wages, coupled with higher prices for public transport and goods in local shops.

Some of the solutions being put forward by Ministers are in danger of undermining the influence of local politicians and residents in finding the answers to local housing problems, while foisting on them housing schemes that could become ‘white elephants’ almost immediately. 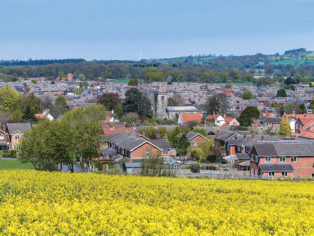