Opening up designs and adding saleability with bifold doors

Hugh Moss, head of marketing at Reynaers, says innovation is continuing to make bifold doors a hot topic for housebuilders.

At this year’s FIT trade show at The International Centre Telford, one thing was clear: the role that bifolds still have to play in the multi-million pound doors and windows industry remains an important part of housebuilders’ businesses. Innovation was everywhere – including new types of finishes, different ways of ensuring thermal performance and, most importantly, the sheer size that folding sliding doors can now reach was on full display.

Latest figures from RIBA say the total average sizes in square metres of new-build three-bedroom homes being built across England is 91m2 – and 88.9m2 when we exclude London. It’s obvious that as land is getting more and more expensive, new builds are getting smaller – meaning that housebuilders need to think of clever ways to maximise the space, and light, available.

A recent survey of architects showed that they see biflolds as an important trend in the current landscape. When asked “What is the most popular industry trend today in residential housing?” one in five answered bifold doors. Our sales teams have reported that more housebuilders are recognising the added value and saleability that bifolds can bring to all styles of development too.

Generally speaking, bifold doors tend to be installed into relatively large openings. Housebuilders say that aluminium is an ideal material to use for the frames, as it expands and contracts no more than 1mm per metre. This means over the width of a 5m door, you might get 5mm of movement. On the other hand, other materials such as uPVC expand and contract up to 3mm per metre – meaning that same 5m door may have to accommodate 15mm of movement. It’s not hard to see why uPVC bifold doors are much more likely to give operational problems than aluminium doors.

Housebuilders also say that the main factor in a good design for a bifold really stems from the frames. If they are thick and clumsy looking, less light is able to reach the interiors, as well as having a negative impact on the design. Slim aluminium frames with fantastic thermal breaks are now readily available and these ensure that the glazed area is maximised.

Operating systems and materials also play a role. Material with good structural stability, such as aluminium or engineered hardwood, will tend to minimise the risk of doors warping and sticking.

It’s really important to look at the quality of the bifolds’ components and how they perform in different scenarios such as varying weather conditions, their durability and how secure they are. Although many bifold doors may look similar, there are only a few that have recognised accreditations such as Secured by Design – the police initiative to guide and encourage those within the specification, design and build of new homes to adopt crime prevention measures in new developments and renovations.

There’s also a variety of bifold door designs to choose between. The number of door leafs will be largely dictated by the size of the opening, but it is worth considering the benefits of choosing a design with a traffic door. Typically found on designs with an odd number of door leafs, the traffic door is a single door leaf that can be opened without unlocking the rest of the door leafs. Effectively operating just like a normal back door, this is convenient for quickly nipping out into the garden.

Bifold doors are usually mounted on sets of rollers that carry the weight of the door and run in a track set into the floor. There are a few bifold doors where the door leafs are hung from rollers that run in a track across the top of the door. This can work well in isolation, but it is worth considering that as the top of the door frame is secured to the lintel above the door, the extra weight of the door suspended from the frame will be transferred to the lintel. If the lintel is not strong enough to carry this extra weight, there is the potential for catastrophic consequences.

Most marketing photos of bifold doors feature a door that has a flush threshold, meaning there is a continuous floor with no step between inside and outside. This can certainly be achieved, but it is worth considering that it is not unusual for bifold doors to come with a choice of as many as four different threshold options. This is because there must be a trade-off between the height of the threshold and the level of weather resistance the door can offer. Flush thresholds won’t be very good at keeping out draughts and the doors with the best weather ratings will have a higher threshold to step over. It’s certainly worth considering how exposed the door will be to the elements, but most people find a compromise by using one of the intermediate thresholds.

It would seem that the bifolding door market is set to get more and more versatile in the future – so make sure you keep abreast of the latest innovations in this fast-paced industry. It’s hard to see any reasons why the popularity of bifolds among specifiers, contractors and homeowners will decrease any time soon. 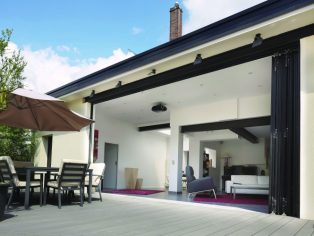 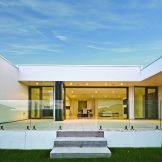