A team of skilled tradespeople from Novus Property Solutions has given a rundown nursery in Cape Town a colourful new look as part of its responsible business campaign.

They undertook an extensive refurbishment of the nursery, which included painting doors, climbing frames and the exterior of the building, replacing broken panels and adding colourful stencils to the classroom walls. The team also constructed a brand new veranda to provide additional protection from the elements for the children, as well as donating a huge array of new toys and sports equipment to the nursery.

The nursery caters for more than 200 children and is located in an area that has suffered from problems with crime and gang activity in recent years.

“I want to thank everybody at Novus who has been involved in this fantastic project. We simply don’t have the money or manpower to be able to carry out the scale of work needed to bring the space up to standard. But the hard work and dedication of the Novus team means that the children can now learn in a colourful and stimulating environment.”

“Everyone at Novus is incredibly proud to have been associated with this project. The look of delight on the children’s faces when they saw their colourful, new nursery is something that will live long in the memories of the team that were out there. As a responsible business, we take great pride in supporting community projects and look forward to completing many more refurbishments such as this in the future.”

In addition to the refurbishment of the nursery, Novus also donated hundreds of football shirts to the local community. Novus’ systems manager Lee Hollins launched the kit appeal in 2014 and soon found himself inundated with donations, as well as receiving the support of Stoke City FC.

Novus joined a 34-strong team from Stoke-on-Trent College and Sixth Form College as part of their Challenge South Africa initiative, which has given students an unrivalled experience of South African culture for 11 years now. Three students and a lecturer from Stoke-on-Trent College joined the Novus team for large parts of the refurbishment and played an integral role in the project’s success. 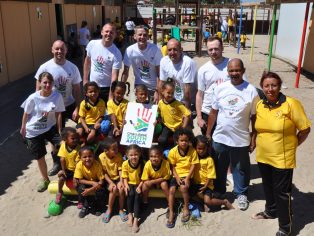