For many years, the preferred material for decking suspended timber floors has been chipboard – and that shows no sign of changing. Norbord’s CaberBoard flooring range is the UK’s best-selling chipboard flooring product, its handy dimensions allowing ease of handling and its robust tongue-and-groove edging ensuring a secure and even surface.

Today things are moving on. As the housing market continues to grow strongly, tradesmen are obliged to look for methods of completing projects faster and more efficiently. Consequently, more of them are looking beyond the standard CaberFloor P5 panel and choosing Norbord’s advanced CaberDek and CaberShieldPlus products.

Both CaberDek and CaberShieldPlus use the same P5 moisture-resistant particleboard but also feature further added benefits meaning the floor can be laid even before the roof is installed.

CaberDek has a non-slip protective film to prevent damage to the board from following wet trades – such as plastering and painting.  The film takes all the dirt and damage away with it, leaving a pristine floor surface ready to accept carpet or other finish.

CaberShieldPlus has a tough, waterproof coating permanently bonded to both top and bottom surfaces of the board giving the builder confidence that CaberShieldPlus will stand up to most heard wearing jobs during the costruction phase.

When CaberDek or CaberShieldPlus is installed with Norbord’s CaberFix range of  adhesives – Joint&Joist, T&G PVA, D4 or Pro Kit – a CaberBoard floor will produce a high quality, long-lasting, squeak-free chipboard floor – and in double-quick time.

CaberShieldPlus, flooring that keeps you building even with the roof off
New from Norbord, CaberShieldPlus is the ideal flooring solution when building in Britain’s unpredictable climate.

Yet, unlike Norbord’s other protected flooring product CaberDek, which features a peel-able film on the top surface, CaberShieldPlus has protection on both sides, not just the exposed upper surface. The top surface features a permanent non-slip coating that not only prevents damage to the board but also ensures a safe working platform. The underside is protected with the smooth coating that not only protects against damage but also makes the board easy to slide into position. For added durability, the coating applied to CaberShieldPlus is not designed to be peeled off after completion but is bonded permanently on both sides of the panel and waterproof.

With CaberShieldPlus, fast-track build programmes won’t be derailed by rain, sleet or snow. BBA-approved for up to 42 days’ continuous exposure to the elements when used with CaberFix D4 adhesive, the new board lets builders carry on building even with the roof off.

The easy-to-handle 2,400mm x 600mm tongue-and-grooved panels are available in 18mm and 22mm thicknesses and are colour-coded to make it easy to identify the top surface.

Ideal for domestic new-build and refurbishment projects, as well as many commercial applications, CaberShieldPlus is delivered in packs of 80 (18mm gauge) or 66 (22mm).

CaberDek flooring leads the pack
While most new houses have concrete ground floor slabs, the vast majority of developers opt for timber suspended floors for first and second-storey levels; and the majority choose Norbord’s CaberDek.

CaberDek is one of Norbord’s flagship quality flooring products. It is made from the same moisture-resistant particleboard as the standard Caberfloor P5 but has a protective non-slip film applied to its upper surface.

In most new-build projects, the upper floors of a house will be installed before the roof goes on with the inevitable result that the new floor is left open to the elements for days or even weeks. CaberDek’s protective film prevents rain and frost damage to the new floor surface as well as providing a safe non-slip working surface for the construction team.

CaberDek can be left exposed like this for up to 42 days without risk of damage. Even after the building is weather-tight, the floor surface remains protected from following trades such as plastering and painting.

When work has finished, the protective film is simply peeled off to reveal a pristine floor ready for covering.

CaberDek comes in easy-to-handle 2400mm x 600mm panels produced in thicknesses of 18mm and 22mm. Suitable for fixing to traditional sawn timber or engineered-timber joists, including metal-web joists, it can be fixed with nails, screws or, for the best results, with Norbord’s own specially-formulated adhesives.

CaberFix T&G is specially formulated to produce strong bonds between adjacent panels along the tongue-and-groove joint. CaberFix Joint&Joist is a high-strength polymer adhesive which remains flexible after curing and is designed to fix a CaberDek floor to the supporting joists.

Replacing mechanical fixings, CaberFix Joint&Joist speeds up installation and produces a floor which is guaranteed free of squeaks and creaks. Its flexibility also contributes to noise attenuation, thus aiding in the floor’s conformity with Part E of the Building Regulations governing the passage of noise.

CaberFix Tape seals the joints to prevent moisture degrading the T&G adhesives. For floors which are likely to be exposed to the elements during freezing conditions, Norbord’s special CaberFix X-Treme tape is recommended.

Featuring the, now-familiar, family of dogs that have been appearing regularly in Norbord publicity, the campaign is aimed at housebuilders and the merchant trade with a focus on the three core products of CaberFloor P5, CaberDek and CaberShieldPlus.

CaberFloor P5 is the UK’s leading brand of moisture resistant  particleboard flooring and is widely used in both new-build and refurbishment projects.

CaberDek is Norbord’s most specified weather-protected flooring panel, featuring a peelable non-slip protective film to prevent soiling and water damage until following trades are finished, when the film is simply peeled off to reveal a clean floor surface.

For maximum weatherproofing during the construction process, CaberShieldPlus is the one to beat. With a permanently-bonded protective coating on both top and bottom surfaces to prevent moisture ingress, CaberShieldPlus will keep the building going even with the roof off.

In all cases, the emphasis is on the CaberBoard range’s reputation for durability, moisture resistance and ease of use. And just like the loyal canine friends featured in the adverts and flyers, Norbord’s particleboard range is one you can trust.

Norbord’s new chipboard flooring guide does all the work
A simple guide to choosing the most suitable flooring products from Norbord’s impressive portfolio has been developed for use by merchants and installers alike.

The guide has been designed as a tear-off sheet on point-of-sale material on racking in merchant and timber yards; to be included in the company’s flooring collateral including brochures; and as a downloadable link on Norbord’s website – www.norbord.co.uk.

The three panel options – CaberFloor P5, CaberDek and CaberShieldPlus – are detailed and advice given dependent on whether or not the floor needs to be protected against the elements (CaberDek), or needs a protective coating (CaberShieldPlus).

Once the flooring panel has been selected, advice on fixing and installation is next. For silent floors and minimal mechanical fixings, there is a choice of CaberFix T&G PVA for T&G joints or Caberfix D4. In addition, guidance for the use of the CaberFix ProKit, with or without the CaberFix X-Treme tape, steers the specifier in the right direction. 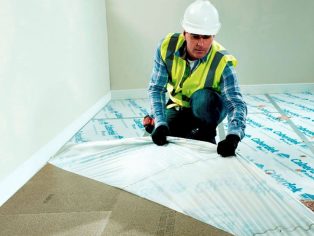