A leading regional housebuilder is celebrating after two of its site managers were awarded a prestigious NHBC Pride in the Job Awards.

James Hanson was recognised for his work at the Persimmon Homes Meadow View development in Redditch, along with Terry Cole from sister company Charles Church’s Brockeridge Paddocks development in Twyning, Gloucestershire.

Andy Peters, managing director for the businesses, said: “I feel very privileged to have Terry and James as part of my team and this recognition is credit to their hard work and dedication to the businesses.”

The awards recognise the highest standards of excellence, with National House-Building Council inspectors judging winners on meticulous and consistent attention to detail, quality of workmanship, excellent leadership, technical expertise and commitment to the highest health and safety standards.

James, aged 30, has been with the business for five years after starting his career as an on-site carpenter. He said:

“Five-years-ago I was given the opportunity to be an assistant site manager at a Persimmon development in Birmingham. Now, I am very proud to run my own site and to have won the award for the second year running.

“It’s stiff competition with entrants from across the country and to beat off so many competitors was a great honour.”

“This is James’ second award in two years, on two different sites, an excellent achievement.

“It’s great to see a young site manager progressing through the business. A Pride in the Job Award is the highest industry accolade a site manager can receive. Persimmon Homes demand the very highest standards of quality and service for customers, and James’ contribution is a superb example of this philosophy.”

Terry Cole, who will be celebrating his 60th birthday in September, works for Charles Church South Midlands, sister company to Persimmon Homes, and has also been recognised for his excellence in on-site management.

“I was delighted and surprised to win another award. I have always had the approach that I am not just building a house but building a home and work with the necessary care and attention to reflect this.

“It has been wonderful to have the support from so many people around me, especially my assistant Craig Dewey and forklift truck driver Terry Ormand.

Terry has been with the business for more than 36 years and was also very proud to highlight that his sons, Danny and Alex, work for the housebuilder.

“Terry is building up quite a collection of trophies now, after already accumulating 16 of the national awards during his time with the company. His extensive recognition is a tribute to his excellent management skills.

“He continues to delight his customers with the outstanding quality he and the team consistently produce.

“We wish both site managers the best of luck in the next round of the competition and hope they secure the coveted Seal of Excellence.” 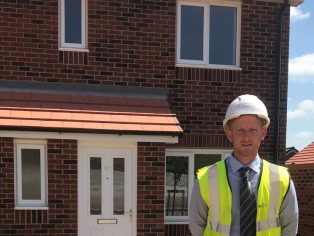