Two members of the senior team at Newland Homes have acquired new roles within the company, as the South-West based housing developer continues to expand its operations.

Tom first joined Newland Homes in 2003 having worked previously for national housebuilders, spending five years with the private company before a short time with another smaller developer.  Jeremy re-recruited Tom just two years later in 2010; in what was a challenging time for the development industry following the recession, but from which Newland Homes emerged resilient.   Tom leads an in-house team at Newland Homes, responsible for all aspects of planning, design and project management.

Tom comments: “I’m steadfast in my belief that relationship building is at the heart of everything we do.  As a team, we build a rapport with people with the aim of creating developments which will leave a lasting legacy for an area.  I’m extremely proud when I visit our past developments, and hugely excited when I consider the opportunity that future sites present.  I’m chuffed to bits to be recognised with this new role.”

Jeremy is an industry stalwart, and has worked with Newland Homes since its inception in 1991. He joined Newland Homes’ Board as Design Director in 1999 and has a key role supporting Tom and others in the choice, look, feel, evolution and delivery of the company’s numerous developments.

Jeremy comments: “With an outstanding team and an amazing company ethic, we create a superb product.  Like all great team members, Tom’s personal qualities add value to this process and his promotion is truly deserved.  Sustainability is high on Newland Homes’ agenda, and my role has enabled me to promote a greener way of thinking which now permeates all aspects of our business, and is progressing towards Low and Zero Carbon products.”

David Foreman, Managing Director for Newland Homes, comments: “The role of Developments Director represents the broad role Jeremy plays in the company across all aspects of design, build, planning and land acquisition.  Tom’s promotion to Planning Director is highly deserved, and reflects Newland Homes’ continued growth and commitment to excellence as we move into our 30th year in business.”

Newland Homes has been responsible for over 125 developments across the South West and more than 3,300 homes.  Just last year it completed the sale of 215 homes; 143 on the open market and 72 affordable properties.  The company has scooped many industry and business accolades, most recently having been recognised by the London Stock Exchange as one of ‘1000 Companies To Inspire Britain’ and by the Sunday Times in its Profit Track 100 for 2019, which identifies the fastest growing private companies in the UK. 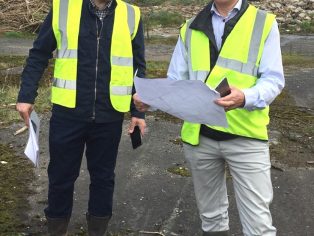