A new £14m housing development being built in Stoke-on-Trent is to be named after a war hero from the city.

Baskeyfield House, which will comprise 80 extra care apartments for over 55s, will take its name from Lance Sergeant John Baskeyfield, a Burslem-born artillery gunner with the South Staffordshire Regiment who died fighting off German tanks at the ill-fated Battle of Arnhem in 1944.

Baskeyfield was posthumously awarded the Victoria Cross – Britain’s highest gallantry medal – for his bravery in the battle, during which he single-handedly operated an anti-tank gun battery to force back enemy armoured vehicles.

The development, part-funded by the Homes and Communities Agency, is being built by Sanctuary’s construction partner Seddon on land provided by the council and will play a key role in delivering the city council’s affordable housing programme.

“Lance Sergeant John Baskeyfield was born and bred in Burslem, so it is really fitting that this important new phase in the town’s unfolding story should bear his illustrious name. We’re really pleased to have been able to help Sanctuary Group to bring this project forward and deliver the kind of high-quality modern housing that our city needs.

“Baskeyfield House represents a new and exciting era for Middleport, but it is also an unmistakable sign that things are changing for the better in Stoke-on-Trent. We are on course to build more than 500 new homes in the city this year and should reach pre-recession building levels of 800 or more next year, which is a remarkable turnaround.”

“Our city is bouncing back, and providing quality, affordable accommodation like this is essential to making Stoke-on-Trent a great city for future generations to live in.”

“We the residents of Burslem Central Ward are extremely grateful to Sanctuary Group for honouring the name of John Baskeyfield VC in this way. It is extra significant as the house where John lived is in very close proximity to where Baskeyfield House is being built.”

“Choosing a name for a new development is always an interesting process and this has proved especially true for Slater Street where we are linking in to both a modern day celebrity and a hero from history.

“It’s important to commemorate local history and we are proud to be playing our part in keeping John Baskeyfield’s name in the spotlight in Stoke-on-Trent.”

“I am so pleased that the Sanctuary Group has chosen to honour the name of John Baskeyfield VC for their Middleport project. I am absolutely convinced that the new community will welcome this tribute to a great hero of Stoke-on-Trent.”

The Slater Street development is on track to complete in March of next year. 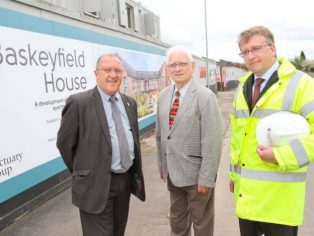