New Housing Minister Gavin Barwell MP this week saw the huge progress being made in Ebbsfleet Garden City during a tour of the area.

The Minister for Housing, Planning and London, saw and heard about sites under development across the Garden City including:

The Minister also heard about plans for the £12million bridge which will link Springhead Park to Ebbsfleet International Station and is scheduled to open in early 2019 as well as seeing  the site where a new primary school will open in Castle Hill in September 2017.

“This Government is determined to build the homes people need and to help them achieve their ambition of home ownership, and I am confident we can deliver many of them in Ebbsfleet.

“Ebbsfleet Garden City has great potential with its high speed transport links and I was pleased to see today the progress made so far.”

“The Minister saw first-hand the pace of development in the Garden City and the advances that have been made in the last year.

“Our developers are on target for 600 new starts on site this year, 300 of which will be completed. The Minister could see the speed at which new properties are being delivered in Ebbsfleet Garden City.”

“Redrow has made a long-term commitment to Ebbsfleet Garden City that will ultimately see up to 950 new homes built on our site, as well as investment into extensive community facilities. These will include a new primary school, community centre, a multitude of sports and leisure facilities, a new park and significant investment into transport and highway improvements.

“We have been overwhelmed by the demand for the homes at Ebbsfleet Green, with over 9,000 people registering their interest in our first phase of 180 homes. It’s clear from speaking with many of our customers that they want to be a part of the brand new community that’s emerging here, in an area that’s under 20 minutes from London by train.”

“As the affordable housing provider for Castle Hill, we are proud to be a leading partner in the development of a new and diverse Garden City in Ebbsfleet with quality homes and a first class infrastructure.

“We were pleased to show the minister first-hand the progress that is being made on the first 125 affordable homes for this exciting project, and talk him through our wider plans to deliver a further 250 affordable homes over six years.” 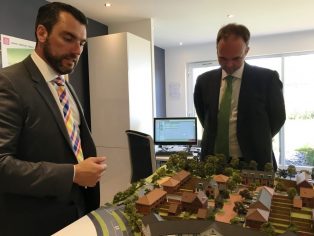