New homes could save families over £1,400 per year in energy bills

Families who live in new build homes built to 2013 standards could save more than £1,400 a year on their energy bills when compared to their neighbours in older homes, according to new analysis by NHBC and Zero Carbon Hub.

A typical four-bedroom Victorian home is more than twice as expensive to run compared to an equivalent new-build home built to 2013 levels of energy efficiency.

NHBC and the Zero Carbon hub carried out an analysis of new figures on projected energy emissions published in September by the Department of Energy and Climate Change (DECC). The analysis of DECC’s figures reveal an enormous gulf between the energy costs of running older homes compared to new ones.

Looking even further ahead, those annual savings could be as much as £1,840 (75%) in 2016, when further Government zero carbon home construction targets come into effect.

The research concludes that next year:

Given the recent price hikes announced by the majority of the Big Six of an average of 8.1 per cent, NHBC warned that these calculations could be on the conservative side.

“This new analysis of a typical family’s energy spend clearly underlines that new build homes are vastly more energy efficient than older stock, and can actively save money on utility bills.

“Given the recent price hikes announced by the majority of the Big Six, these savings calculations could be the tip of the iceberg.

“While energy efficiency is only one of the advantages of buying a new-build house, the potential to make this level of savings year after year could be a crucial factor for families when making their decision on which home to purchase.” 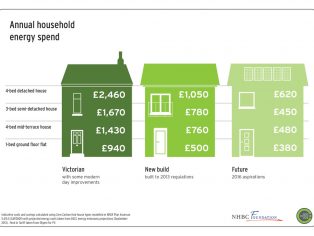