Nottingham City Homes’ innovative new approach to fire safety has been recognised at the annual Committed to Construction in the East Midlands Awards.

Held each year by the Chartered Institute of Building (CIOB), the Committed to Construction in the East Midlands Awards bring together the region’s top suppliers, designers, construction firms and partners, to celebrate excellence in the industry.

NCH was looking for a new system, used in its flats and communal buildings, that could be tailored to the needs of the service. The technical team at NCH worked with the supplier, LAN Control Systems, to develop a system to improve fault reporting and isolate the location of a raised alarm right down to the individual floor and flats.

Working in tandem with the City Council’s CCTV service, this enables officers to quickly check the exact location on camera to discover whether the alarm has been set off accidentally, or whether there’s a fire to attend.

The system, first set up in February 2013, will soon be rolled out to support a range of other citywide support services, such as water tanks, emergency lighting and extract fans. LAN Systems is even looking to use this system with huge national and international companies such as The National Trust, having already been awarded contracts with Coca Cola.

“Although the service is behind-the-scenes, and most of our tenants will hopefully never have to use it, it’s incredibly important that it’s there and functioning to its optimum level.

“The Nimbus system has already saved us 20% on the service we provide, giving tenants better value-for-money, as well as offering the potential for future use in other areas embracing modern technology and giving us an excellent audit and management tool for the future.”

“Being recognised in these awards is another fantastic achievement for our great staff at Nottingham City Homes.

“We take the safety of our tenants very seriously, so having effective fire alarm management is imperative. The team deserves huge praise for not only highlighting the need for an improved service, but for their innovative approach in developing the system, and achieving such fantastic results.” 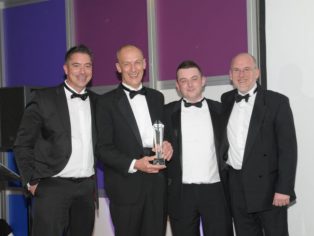 NCH at the CCIEM awards