Stuart Base, head of marketing at SIG Roofing, explains why natural slate remains in a league of its own in comparison to other roof coverings:

When it comes to gracing the roofs of new homes, there’s a bewildering choice of roofing materials on offer. Whether it’s concrete, clay or slate to name but a few, there’s no shortage of roof coverings to choose from. However, in terms of aesthetics and exceptional durability, there’s a product that remains in a league of its own and that’s natural slate.

One of the world’s oldest and most continuously used roofing materials, natural slate protects many of the world’s historic buildings. Indeed, many reclaimed slates continue to be installed on re-roofing projects even after decades of previous use.

A well-laid slate roof will enhance any new home and give problem free protection for the lifetime of the building. The carbon footprint of natural slate also compares well with other roofing materials – particularly when the life expectancy of the finished roof is considered. Some studies estimate the embodied carbon (per m2 of roof) is at only 16 per cent than that of the next best roofing material. This reduced environmental impact makes it an even more attractive choice for new builds.

Natural slate should be tested to BS EN 12326 Part I and meeting the highest relevant ratings, it will be unaffected by normal extremes of temperature and highly resistant to acids, alkalis and other chemicals. This means that it is resistant to acid rain and atmospheres that contain sulphur dioxide, whereas man-made products commonly discolour due to weathering or the growth of lichens.

While man-made slate options provide a cost-effective and conveniently sized alternative, they fail to offer the authenticity and character that makes natural slate an unbeatable standout.

For those housebuilders, developers and specifiers working in conservation areas where the slate selection must match existing roofing materials on surrounding buildings in the locality, only natural slate will do. Respecting the traditional or local character where it is used, it also features variations in colour, size and texture.

Fortunately, with more quarries available worldwide, suitable alternatives can now be found to match most British origin slates found on roofs throughout the country.

Natural slate remains at the pinnacle of roof coverings but premium products command premium prices. As well as the product costs, labour tends to be more expensive too and as it needs to be sorted and worked with, it adds time on-site. Experienced slaters command a premium over tilers, as they know how to get the best out of every piece.

Worryingly, an increasing influx of cheap slate that appears appealing at first glance is tempting some specifiers and developers to cut corners but sadly, they have little appreciation of the risks. Cutting corners on labour you can get away with, but the roofs may not be beautiful. Cutting corners on product is riskier, as the roof may simply not be fit for purpose. If it seems too good to be true, then it probably is. The problems caused by using cheaper and inferior natural slate are endless.

Not only can inferior slate be riddled with inconsistencies and imperfections that result in high wastage, it translates into higher labour costs too. Its traceability is also a problem when something goes wrong, or if spares are needed to finish the job. And that’s before the warranty is taken into account, assuming it has one, and whether it’s even enforceable under UK law.

The actual rock itself may be high in carbonates (and will bleach), or high in reactive metals (and will run with rust). It may have high carbon content (delamination). At best, it will be a cheap selection that 30 years ago would have been landfilled at the factory – this will require more labour to get right, and of course roofers don’t work for free.

It may not even be an actual metamorphic slate. Brazilian slates can be even cheaper than Spanish or Chinese – but they’re still about 470 million years younger, and they sit outside the scope of BS EN12326, the standard for natural slate for roofing.

Most of the man-made alternatives to natural slate will show savings in material costs.

Produced in a factory environment where quality is easy to control, they remove the risk and reduce material costs, but at the expense of aesthetic appeal. Because of their factory consistency, any roofer can install them.

Cheaper slates mean more risk – which can kill a housebuilder’s business. If you are simply looking to make a saving, then other roofing materials will provide a better finish, and they will do your reputation more good than having problems further down the line with a cheap slate. Only ever invest in the best, for as Gucci once rightly said:

“Quality is remembered long after the price is forgotten.” 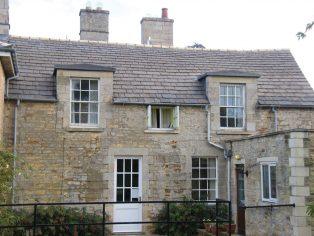 For those housebuilders, developers and specifiers working in conservation areas where the slate selection must match existing roofing materials on surrounding buildings in the locality, only natural slate will do

An example of a good quality natural slate 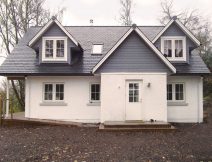 The reduced environmental impact of natural slate makes it an even more attractive choice for new builds, aside from its aesthetics and outstanding beauty