A Southampton woman has scooped a national award, just 18 months after starting her career in house sales.

Connie Docherty was named as the Persimmon Homes Sales Trainee of the Year, beating off competition from the leading national house builder’s 25 other regional teams.

The 24-year-old was described as a ‘true example of an achiever’ by her manager, Nicole Creighton.

“Connie started with Persimmon Homes as a trainee sales advisor in January 2014. She came from a retail background, which was a customer facing role involving lots of selling.

“Connie picks things up extremely quickly and is very proactive about accessing the training she needs to be successful. She is bright, enthusiastic and is able to deal with customers on all levels, showing true sales skills.

“Her ambitious and driven nature has ensured that she was promoted to a sales advisor after one year with Persimmon Homes. Her sales rate is consistent and if she goes a week without selling a home she will make up for it the following week with two or three sales. Her record is five sales in one week.”

During her training, Connie spent time in the region’s head office working in the planning department and on site shadowing the site manager. She also undertook training modules, which included customer service.

She is now based in Andover, at The Fairways, a development operated by Persimmon’s sister brand, Charles Church.

“Working for the company really appealed to me as it is a customer-focused business. I get a lot of job satisfaction helping a buyer through every stage of their journey.

“I really enjoy working at The Fairways as we have two show homes here and are always busy with customers.”

“We are thrilled that a member of our team has won such an accolade and hope that it encourages more young people to join the business.

“Persimmon manages a robust trainee and apprentice programme, taking more than 100 young people into the business nationally each year.

“We feel it is important to reward those youngsters who have got off to a flying start and our winner Connie is a perfect example of this.”

The Young Achievers award programme was launched by Persimmon Homes last year to showcase its apprentices and sales trainees who have gone above and beyond to succeed in their role. 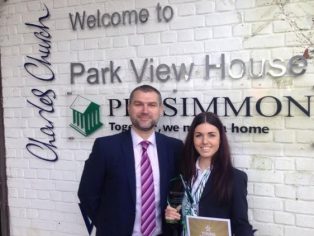