Ash Mill Developments Limited has purchased one side of an entire street in Warwick town centre and now work is being undertaken to restore 18 Grade II/II* listed houses to their former glory.

Previously used as the County Council Education Department offices, there are 18 houses in total, one of which will be sold in a raw state, three as “shells” and the rest as finished houses. Included in the 18 will be two new build properties. While preserving and restoring the houses, Ash Mill Developments has cleared some 20,000 square feet at the rear of the site by knocking down a 1930’s office building, enabling them to provide the new properties with landscaped gardens and parking. The row of late 17th and early 18th century buildings are now being sensitively restored to make beautiful family homes.

Described by Alec Clifton-Taylor as ‘the finest eighteenth century street in the Midlands,’ Northgate Street is referenced in sources as early as 1280. The street has an amazing history; it falls along the road between Warwick Castle and Kenilworth Castle, which was once home of Robert Dudley, Earl of Leicester. Queen Elizabeth I was known to have processed through it on her way to visit Dudley during the Royal Progress in the summer of 1572. Along with many former mayors of Warwick, other famous residents include Joseph Parkes, radical politician and his brother Josiah Parkes who was an engineer and inventor. Architect Francis Hiorn, lived on the street as well and remodelled many of the present houses on the site which stands today. Additionally, number 22 Northgate Street was the County Police Headquarters from 1882 and still has the original police cells in the basement.

Each house will come with rear gardens and parking and externally the windows, walls and roofs will be restored. The development takes up the whole of the eastern side of the street and also the buildings on Northgate Place, and those located at the top of The Butts, including the warehouse, previously the home of the County Court Museum store.

House number 2 is available to purchase in a totally raw state and will be presold along with the three “shells” due to the early demand for these unique properties.

“Northgate Street is the biggest project to have come to Warwick for a long time. The Ash Mill Developments specialists are particularly skilled in restoring heritage buildings and it will be fascinating to watch this street be turned from faded offices to the glorious houses they once were. Northgate Street provides an excellent opportunity for a few buyers either to choose to run the internal renovation of their home themselves or to have a “Georgian gem” fully restored and ready to move into. Warwick has a strong local market, as well as broader South East appeal and I expect these properties to attract local downsizers who have sold their country house and are looking to move back into town, or alternatively local professionals with families who want a house close to the town centre, excellent schools and other amenities.” 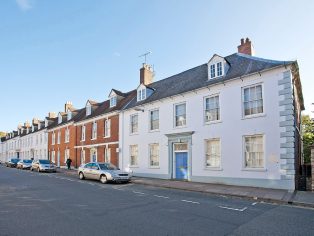